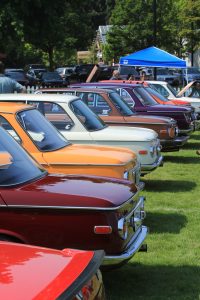 Our traditional last-Sunday-in-July show at Cedar River Park in Renton was held on July 29th. We’ve had this date, part of Renton River Days, for decades. It’s a great date (statistically the best weather weekend of the year) and location. The show itself has changed over the years. For over 30 years it was our annual Concours d’Elegance. Then it became the Deutsche Marque show with other German car clubs participating. 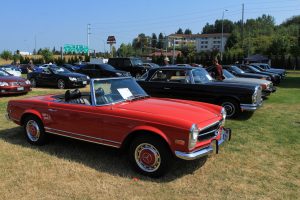 This year we celebrated the 50th Anniversary of the introduction of the 2002, but we also invited the other German car clubs again, so this was a bit of a hybrid. The Audi Club had a conflict and didn’t participate but the Porsche and Mercedes-Benz Clubs had good showings. We even had a solo Volkswagen Thing!

In total, we had about 140 cars shown and a good mix of historic and modern vehicles from all three marques. The owners were generous in sharing the histories of their cars. Us Bimmer Guys learned a lot about old Mercedes and Porsches; great stuff! The proceeds from the event went to the Renton Lions Club. We donated $1,000 to the Lions Club for their continued great work in the Renton area. 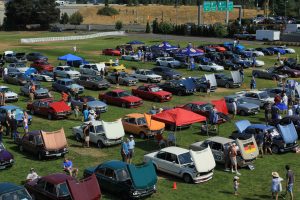 The event was so much fun and the camaraderie was enjoyed by all, so we’re thinking we need to go back to the Deutsche Marque concept for next year and get the other Clubs involved more and earlier. President Steve Libby was the organizer this year but we should probably get someone else to take this on for 2019. If you’re interested in volunteering, Herr Libby will be happy to mentor you. Let Steve know.