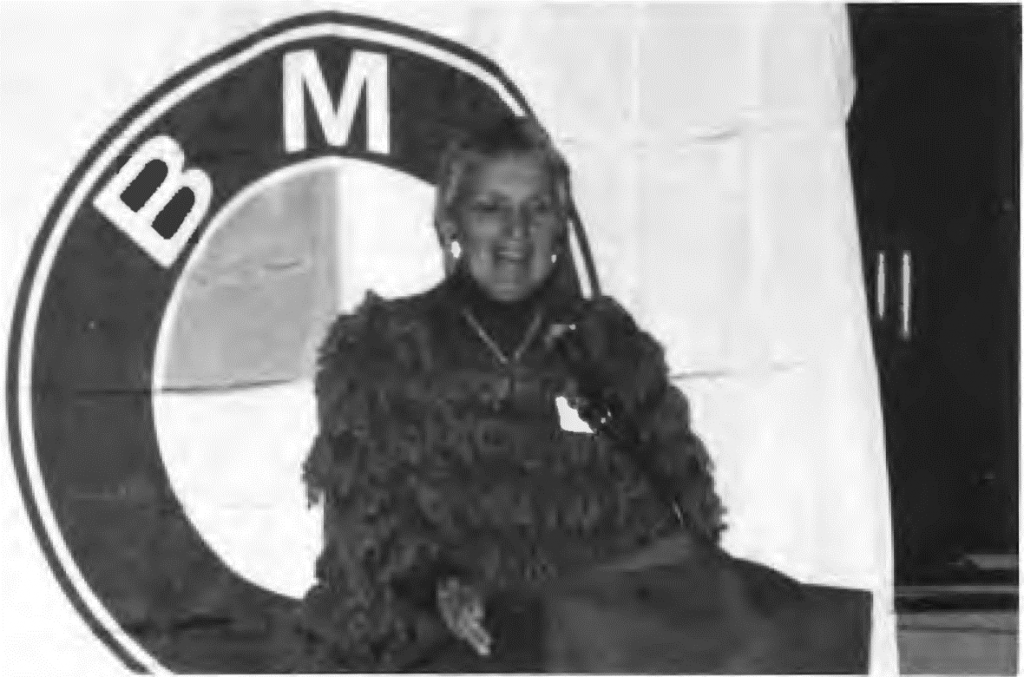 Denise McCluggage of Autoweek talked to a large contingent of club members and supporters at our annual banquet November 19that Salty’s Alki. Denise has had extensive experience in motorsport, both as a participant and as a writer, and her presentation was characterized by a wonderful sense of humor.

She entertained us with her observa­tion on both motorsport and automobiles in general. One of her early ex­periences combining racing and writing was during her stint at the New York Herald Tribune. There she provided her readers with behind-the-wheel insights while at the same time getting 8\/i / mile for racing expenses!

Much of Denise’s racing experience was gained on North American and European rally circuits. Her experien­ces were brought to life by her observa­tions of the reactions of spectators and others along the rally route. She mentioned a time when she and her rallyist colleagues improvised a path around stalled traffic in a Montreal snow­ storm: they used the ditch, to the shocked expressions of the  motorists · stuck  on  the  road   itself.   She  also recalled vividly European gendarmes impatiently waving rally cars through very narrow streets in tiny villages. Apparently the constables felt the rally cars’ 90-95 mph speeds were too slow!

Rallying, like anything else, has its superstitions. The prime belief is never count your chickens … etc. Running a Ford Cortina through Yugoslavia, she excitedly said to her partner, “We’re going to win!” Alarmed, her partner replied, “Don’t say that!” But it was too late. At that instant, a piston seized . The next time you’re in Yugo­ slavia, you might run into an old Cor­ tina with a seized piston, since they never got it out of the country.

For those skeptical of the applica­bility of rally driving skills to street driving. Denise recounted an incident that she had witnessed only that morn­ ing on her way to the airport. Appar­ ently a driver on the opposite side of the freeway decided that he didn’t want to wait until the next exit to make a U-turn. Instead he crossed the remain­ ing lanes of his side of the freeway, the median and the oncoming lanes of traffic  in   a  roughly   perpindicular manner (it had been snowing) before coming to rest on the far shoulder of Denise’s side of the freeway. Denise half-jokingly stated that her rally skills helped, because “Ididn’t t-bone him or anything.”

From her perspective as ajournalist, Denise feels that Formula One is the most difficult and challenging of all motorsports. It has become, she said, “more thanjust withstanding g-forces.” Maintaining the theme, Denise gave her opinion on the two McClaren drivers:

Warming to the subject, Denise went on the discuss some of the greatest names from an earlier era of Grand Prix  racing.  Juan  Fangio  was  des­cribed as “definitely a superior being” and one who would do what was needed to win, no more or less. This latter trait didn’t endear the “Buddha in a brown hat” to Enzo Ferrari, who apparently wasn’t happy with a 2- second win if he thought the driver should have won by a greater margin. Simply, Fangio didn’t drive with the brio Ferrari appreciated in a driver.

Based on this sort of assessment, Fer r ari proba bly w ould n ‘t have thought much of Phil Hill. Hill was another who, in Denise’i.words, didn’t feel it was necesary to risk his life at every corner. She described Stirling Moss as the best driver who never won the driver’s championship. She re­ counted the year that Moss lost the driver’s championship by one point when if the prior year’s rules had been in effect, he would have won.

Returning to the subject of Enzo Ferrari, she characterized him as an extremely complicated individual who was brilliant in many ways. He had “a knack  for  gathering  great  engineers and ideas and an equally proficient knack for destroying them.” He was “a bastard, but an interesting bastard.”

Denise offered a few thoughts on the state of the automobile industry today. Like many enthusiasts, she expressed concern over the growing tendency of large manufacturers to buy the smaller specialty marques: GM – Lotus, Ford -Aston Martin, Chrysler – Lambor­ghini. Such marriages, she said, may have a “reverse Midas touch!” She had harsh words for GM in particular, say­ ing they killed the Fiero just when they got it right. Denise wondered aloud how someone like Roger Smith ever got to be CEO of the company.

One particular car about which she spoke at length was the Corvair. She said that if the car had run with 2° negative camber, it may have made people forget the Corvette, and  more importantly it would still be around today. Despite these accolades, Denise readily acknowledged the Corvair was far from perfect. She described one instance during a rally when she had to drive for miles holding a broken igni­ Lion switch in the “on” position. We’re talking major league cramp here.

Asked her personal preference, Denise said that she felt a powerful engine in a front-engine, rear drive layout was best for brisk motoring. Concerning her experience with front­ wheel drive, she stated only half in jest that she has become “very good at backing up.”

As one might expect, Denise has owned many cars, although she says she doesn’t change them as often as she used to. At one time she owned a Fer­ rari 250 GT, which she sold for $6000 and a Mini. Now that the 250 GTs are being traded for about $1 million, she says her friends tell her she would be a millionaire if she’d kept all the cars she has owned. She told us she informs them she would have to have been a millionaire in order to have kept them.

A few other responses to questions:

Car that wouldn’t die: plastic ones.

Best way to achieve admiration for your car in Europe: Drive a Ferrari with a crumpled fender and ghosts of numerals on the side.

On driving – and drivers

While the 55 mph speed limit is a subject of widespread ridicule (Denise said she caught up on her mail, al­ though she would n’t recommend this to others) Ms. McCluggage felt that there are many drivers who simply are not competent enough to handle higher speeds. Her feeling is -that the level of driving skills has noticeably deteri­ orated in the U.S. As examples, she trotted out familiar villians: left lane bandits, people who fail to signal, peo­ ple who constantly change lanes in traffic, those who feel flashing the turn signal gives them the right to change lanes, etc. Driver’s education is a joke. Most of all she lamented those who would spend $4000 to learn how to properly use a $125 tennis racket but nothing to learn how to use a $40k automobile. Comparing drivers from U.S. to drivers from Italy and given the extremes of both, she said she prefers Italy.

To survive this chaos, Denise said she follows a few simple rules: main­ tain concentration; know the limits and the circumstances you’re in and act accordingly; and “don’t scare the natives.” Admittedly, this last is diffi­ cult, given some of the random, inex­ plicable behavior commonly observed on the highways.

Denise was certainly an entertaining guest. Her anecdotes were insightful, and her observations were keen and to the point. She was able to comment on issues related to a given subject in such a way that listeners would understand more without being overloaded with extraneous detail. The entire presenta­ tion was delivered with wit and style.

We thank her for being our guest, and look forward to hosting her again sometime in the future.