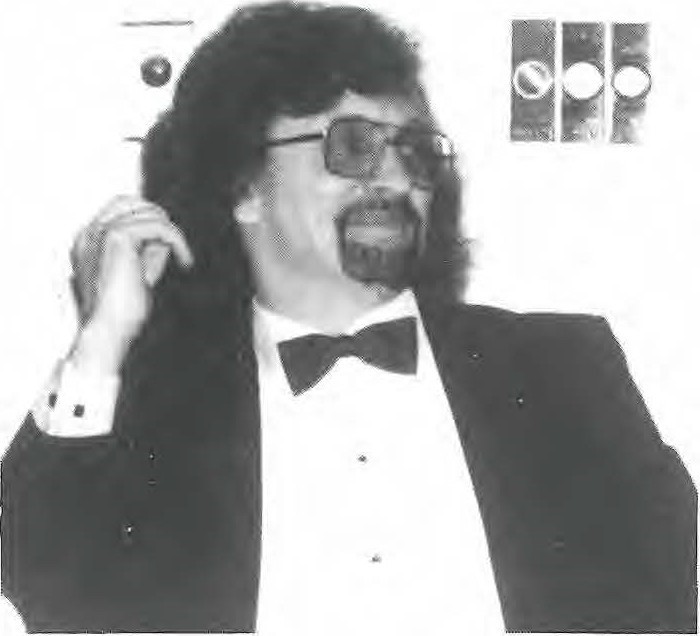 The highlight for the  1987 banquet was, as you know Autoweek columnist Satch   Carlson,  Satch  spoke  at  our annual  banquet  in  1983 and  was  so well received we had  him back. This special Bimmer  Bio is for those who d id n’t see Satch at the banq uet and to give a bit more background  for those who did attend. Satch’s visit to Seattle was coord inated by our friend , David Griffit h, owner of Alan  BM W-Saab. David and Satch have been friends for many years. On several occasions Satch has written colu mns abou t cars he has borrowed from David, notably a beau­ t iful red 633 coupe and an awful A M C Pacer. Satch descri bed Pacers as “lousy cars but t hey make great terrariums .” Regular readers of Autoweek  prob­abl y enjoyed Satch’s talk more than those u nfamiliar with hi m. To those who read  h is column faithfully, it was li ke listeni ng to  an  old  friend . Those w ho d id n’t know what to expect  were probably surprised to  hear  him  rattle on about his child hood , men vs. women , Saabs and assorted  other topics . But these and more are part of Satch ‘s repertoire. There are no sacred cows to Satch and he started i n on BM Ws almost from t he begin ning. Said he, “Sometimes I tell jokes, trouble is, I don’t k now many jokes, except for the 528e and 31 Si and a couple of others.” Actually, the only BMW Satch ever owned was a 3.0 litre coupe. He said he once d rove it over a frost heave at 90 mph just so he could say he had “flown the  coupe.”

Satch told us all about his child­ hood . The on ly trou ble was, you d id n’t k now what to believe. Some things were obvious exaggerations while oth­ ers were believable. But all were funny. He also d id a routine about the names and uses that men and women give to various implements. He’d hold the item over his head and ask for a response for the men and women in the aud ience in turn. I’ll let you guess what he  actually  was  holding, but  it went something like this:

Satch also told a few incredibl y corny jokes. Here’s an example: two carrots (yes, carrots) are walki ng along the side of the road . One decides to cross the road and gets mowed down by a car. The injured carrot is rushed to the hospital. The uninjured carrot waits for his friend. The doctor comes  out and says I have good news and bad news. The good news is your friend is going to live. The bad news is he’ll always be a vegetable. We all groaned and, fortunately  for  Satch, the d inner d ishes had already been removed.

Parts of his talk were educational. Satch demonstrated the proper way to open champagne without losing a drop. He also told us that Moet of Moet and Chand on Champagne was a Belgian and that the name is properly pro­ nou nced mo-ette, not mo-ay. Never know when this stuff will come in hand y.

Last July Satch spoke to a group of BMW enthusiasts in Dallas . By all reports the talk was great. And it was long. He spoke for about two  and  a half hours. Those in attendance com­ mented about how head-over-heels in love he was. He had split up with his longtime house mate who he called “the leggy stockbroker” and was now totally infatuated with and engaged to a young woman . And young she is, probably mid-20s compared to Satch’s probably mid-40s. She used to be a student of Satch’s (he’s a high school English teacher in Anchorage). She now is in grad uate school in Berkeley while Satch pines in Alaska.

Don’t be concerned that I’m writing about Satch’s love life i n our maga­ zine. He does it all the time and Auto­ week ‘.s readership is a bit larger than Zilndfolge ‘s. Satch ‘s friend is named Linda b ut he has referred to  her  in print as “the person of the semi-Asian persuasion,” “the Stunner”  and  “a woman so beautiful she’II unfocus your eyes.” I told my wife that with  that build up, any woman  would  have to be a disappointment in person. Well, Linda d id attend the banquet with Satch and, yes,  she  is  pretty  bu t ,  no , she d id n’t u nfocus my eyes.

Some people mentioned that Satch didn ‘t seem quite “on” or as good as in the past. There was a reason for this . We  picked  Satch  up  at  the  airport u pon his arrival the night before the banquet. We talked for a while since Lind a was arriving an hour later from Oakland. Satch mentioned his “soon­ to-be-ex-fiance .” “Huh?!” I said . He explained t hat despite his being mad ly in love, Lind a had decided to join t he Peace Corps. Our banquet weekend gave them the opportunity to get to­ gether and talk things out. The show went on and Satch was remarkably entertaining for a person undergoing the type of personal turmoil he m ust have been experiencing. At the end of Satch’s talk, after the champagne demonstration, he said “Thanks  for the chance to come speak to your club. This weekend means more to me than you can know.”