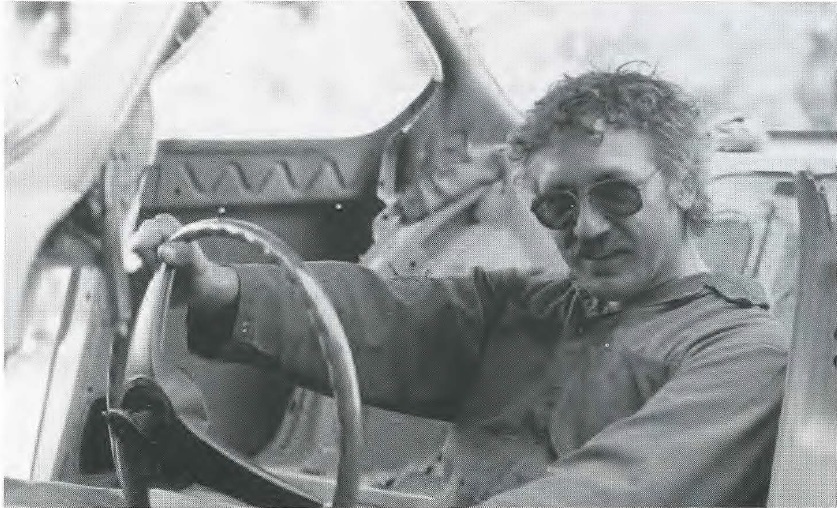 The Phoenix was a mythical bird said to have lived 500 years . It threw itself onto a pyre and was burned to ashes. From the ashes the bird arose , again youthful. Any owner of a Karmann bodied BMW knows that these cars don’t bum up, they rust away. This is the story of a coupe that arose, after a lot of effort, to live again. 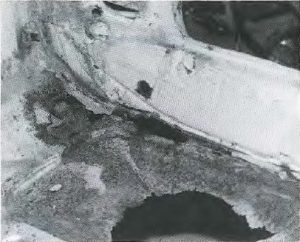 An example of the extensive “before”
rust. This used to be a floorboard

As you can see from the photos, Andy Barcheck’s 2800CS had a bad case of coupe rust in all the usual places. Andy acquired the coupe in August ’82 from club member Wayne Dupont. The cai had been repainted by a previous owner. Often a coupe’s rust is painted over. And in six months or a year the bubbles under the paint began to appear. Wayne had planned to mount a major restoration of the car but never got around to it. Andy inspected the car thoroughly and knew what he was in for. Why did Andy take on a project of this magnitude? For several reasons . First , he didn’t want to pay the $12,000 to $15,000 going price of a nice 2.8 litre coupe. Second, he had recently sold his race car and needed a project. Third and most importantly, he wanted to learn new skills . The restoration was mainly designed to be an educational project. Nice term paper, Andy.

A lifetime of involvement with cars made Andy qualified to take on a restora­ tion of this scope. Andy grew up in Port­ land. In high school he had use of his mother’s ’64 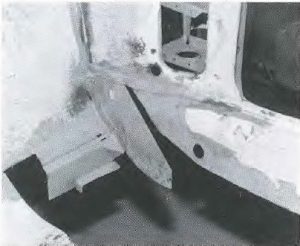 The cancer is cut out. The sheetmetal
that remains was sandblasted.

Pontiac Tempest which he describes as “fun” and later a 340 Barracuda which he calls “more fun .”In col­lege he had a ’65 Volkswagen. Andy started autocrossing in 1967. During his years at Portland State he also had a Porsche 914 (he bought it instead of a 2002 and later regreted his decision) and a turbo-charged VW beetle. Andy’s major in college was Automotive En­ gineering. His background led to his in­volvement as a crew member for veteran Portland road racer Lauren St. Lawr­ ence. St. Lawrence raced a 2002 that went to the SCCA National runoffs at Road Atlanta in 1972 and the Canadian runoffs in 1973. Andy got to drive the 2002 once in a race . He was scheduled to co-drive an enduro with St. Lawrence until St. Lawrence was offered a Trans­ Am ride with George Folmer, an oppor­tunity not to be missed. Andy also did some work on a BMW powered Chev­ron. More recently Andy did consulting work for St. Lawrence’s Michelob-spon­ sored Mercedes SL racer. He designed the chassis and suspension.

After a year of crewing, Andy began racing a Datsun 510 in 1972. He graduated to a Datsun 280Z which was raced one year as a production car and then improved and raced in a higher class. 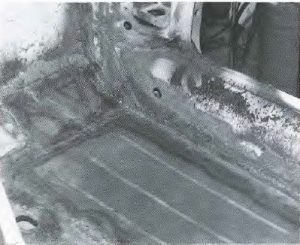 New sheetmetal is welded in and prepared
for primer.

A fine driver and mechanic, Andy won eight Conference championships in eight years. He also did a little SCCA racing with his best season resulting in a second in the North Pacific division. He currently races a Volkswagen GTI often enough to keep his licenJe current. 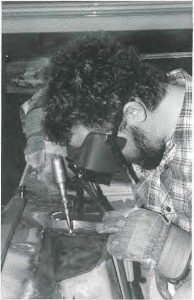 Andy in the midst of his educational project.
Here he’s welding a shock tower.

But it’s tough to make a living racing cars and Andy never tried. After com pleting his schooling in 1969, he moved to Bremerton to work in the Naval ship­ yards as a mechanical engineer. His love of designing and fabricating, of trying different kinds of welding, of fabricating parts, and of constant learning led to the coupe project . As you can see, the car was completely disassembled. Large pieces of sheet metal were cut out and re placed. Virtually everything was sandblasted. What remained was etched to kill any rust remnants. The mud and moisture traps BMW tends to build into its  cars  were  redesigned,   welded  and sealed.   Spray  guards  were  fabricated. Two coats of epoxy were applied before any  paint.   Everything  was  done  in  a manner  to assure long life.  Andy  says, “This one is going to be around a long time.” The drive train  was in relatively good shape and a clutch and minor items were all that was necessary . The interior was and is passable. Andy plans to do the interior when time permits. He did all the work  himself  except  the  painting.  The paint was left to an expert who applied a beautiful  black finish. Owners of black cars know  the trials and  tribulations  of keeping  a black  car looking  good.  But they  also  know  that  when  a black  car does look good, it looks very, very good . Andy  has  used  his  coupe  sparingly since the restoration,  adding  only 3000 miles to the odometer in a year and a half. 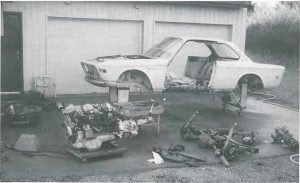 Coupe “kit” with only some minor assembly required.

Andy’s wife Sandy got a 320i new in 1981. It was then that the Barchecks joined both BMW ACA and BMW CCA. A daughter, who will be five next month, promoted a desire for four doors. Sandy now has a ’79 528i. In October of 1985 the coupe was taken to Monterrey for the national CCA Oktoberfest. There it scored fourth in class, five points (out of 200) out of first place. At the 1986 club concours d’elegance the coupe won first place in class, best in show and peoples’ choice, every category available to it. This beautiful car is a show stopper wherever it goes. Non-BMW aficionados often claim to have never seen this body style before, but everyone admires the car’s timeless grace. 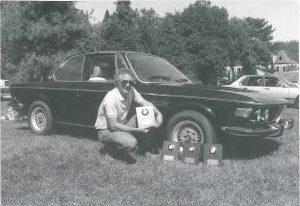 Andy bringing home all the wood at last year’s concours. This was the first time one car
took all possible awards.

A specialized , national coupe register is   maintained   by   our  friend   Charles Richardson .  Charlie  is  a  naval  dentist and  was  stationed  in  Bremerton  for  a while. He published the story of Andy’s restortion in the coupe register’s newslet­ ter and ever since Andy has heard from coupe owners across the country. He has . aided  in  several  restorations  by  phone and  correspondence.  Andy  is currently working  on  a  new  project:  putting  an Acura V-6 in a Honda Civic. Behind the seats. I asked if he would take on another restoration.   He  indicated   he  probably wouldn’t, ·but  not  for  the  reasons  you might    expect.    Having    satisfied    his curiosity  about the techniques involved, he is no longer interested.

If you’d like to see this car first hand, come out to the club’s concours at Ste. Michelle on July 12th. Andy will be there to defend his title. See this Phoenix that arose from the rust, again youthful, to live again. Maybe for 500 years.