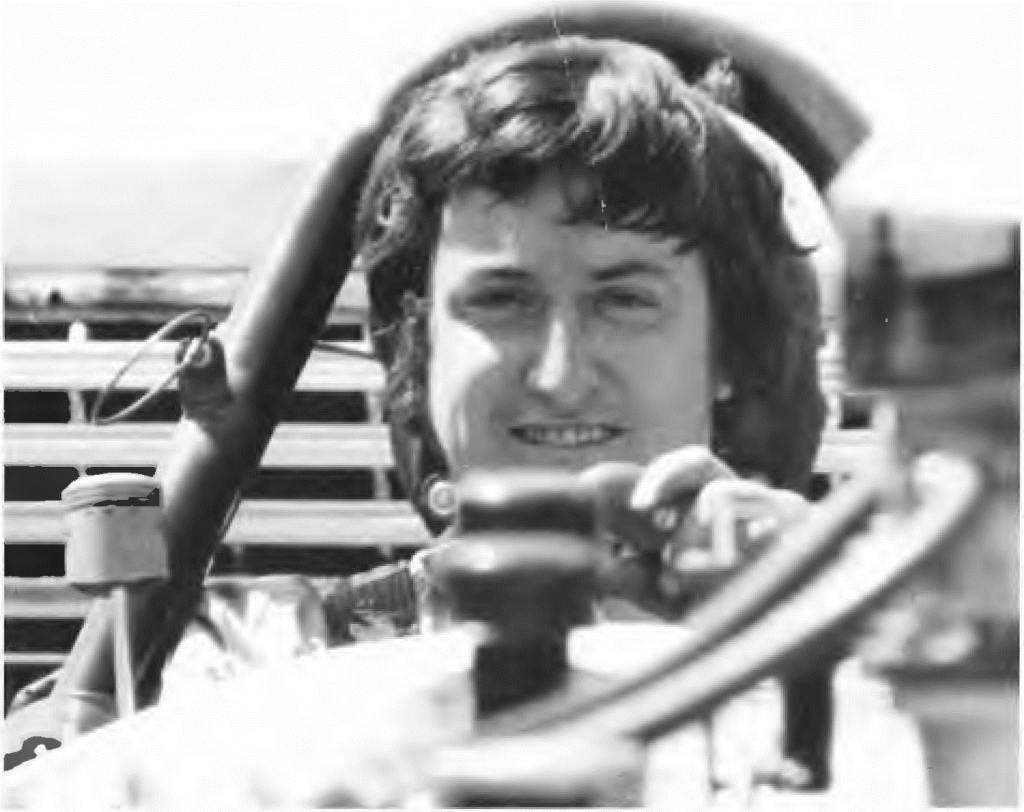 For a local car club chapter, we’re a rather far flung bunch. We’ve got members all over Washington, parts of the U.S. and Western Canada. We’ve got a real concentration of members in the Victoria area on Vancouver Island. The subjects of this Bimmer Bio are Andy & Gail Davidson, our main con­ nection in Victoria.

Andy’s family goes way back in Vic­ toria. His mother was originally from the Channel Islands, a British territory in the En_glish Channel just west of France. She emigrated to Victoria in 1905; a real pioneer. Andy was born and raised in the Victoria area and has never lived anywhere else.

Like so many of us, Andy is a car nut oflong standing. He became interested in automobiles about 1962. In 1964 he got an auto apprenticeship. He worked as an automotive machinist, building engines, from 1964 through 1975.

Andy has always been one to change cars rather frequently. Prior to seeing the light and becoming a BMW fanatic, Andy owned a ’51 Austin A40, a ’54 Canadian Buick V-8, a ’60 Chev, a ’69 Cortina GT, a ’62 Chev wagon, two VW bugs, a Chevy II and a ’70 Datsun 510. The Austin cost Andy $150. Andy promptly had the Austin’s front end lowered in keeping with his motto, “Never leave well enough ” The Cortina was bought new and used as a drag racer.

The drag race bug got more serious later. Andy and his partner completely hand-built a dragster in the partner’s basement. The car was a 140 inch D class dragster. The power came from a 230 Chev engine with 283 Chev com­ ponents. Carburetion was by three (count ’em, three) 500 CFM Roches­ ters. The one piece fiberglass  body (such as it was) was finished with six coats of mother  of pearl lacquer with “spider webbing.” They finished the car in 1972 and Andy later raced it.

But we all have to grow up eventu­ally, don’t we? Andy decided he needed a different line of work to provide more stability and a pension. A friend introduced him to police work, and he became an auxillary. The adventure appealed to him and he went through the police academy in Vancouver from 1975 through 1980. He started work­ ing as a uniformed officer in 1975. Andy is employed by the Oak Bay Municipality, which is an affluent suburb of Victoria. He currently works out of the office as an acting sergeant. Next year he will work as a detective constable and the year after he will be back on patrol.

Andy’s first BMW came when he traded his Datsun 510 on a ’74 2002 in 1977. Andy entered this 2002 in his first concours d’elegance and placed third. This red 2002 was to be the first of several very clean BMWs Andy would own. The 2002 was replaced by a red ’81 320is. Moving further up market, Andy’s next bimmer was a ’84 325e which was bought new. Many of us remember this stunning car. It was black with red leather upholstery. The black paint was polished to a remar­ kable sheen by Andy and was accented by pin stripesin BMW Motorsport colors. The pin stripes were applied by Rick Brown , the same guy who did the spider webbing on the dragster in 1972. After a year with this beauty it was time for more doors, so an ’85 528e in black was purchased new. Next came a VW Jetta. Ugh. Three months with this rubbish sent the Davidsons fleeing back to BMW. A 1975 white 2002 was kept until the house needed siding. Next came a ’79 320i automatic. 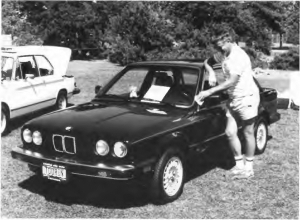 The current Davidson cars are Gail’s anthracite 530i automatic and Andy’s white ’70 2002ti. Andy purchased the 2002 from a local doctor, age 75, who had owned the car since new and put but 42,000 miles on it. It was a clean machine when purchased and it’s cleaner now that Andy’s worked it over.

Andy’s first event was the Leaven­ worth Tour one year. Lucetta and I were the last car of about two dozen participants. Our job was to rescue anyone who broke down. With BMWs this rarely happens, but going up a bill, Andy’s red 2002 pulled over with steam pouring out. A motor mount had broken causing the engine to shift and break a radiator hose. This happened on our famous back road which we use to get into Leavenworth. It’s a twisty road meant to be driven hard in a BMW. We followed  it into town to help Andy find a replacement hose. While blitzing along we learned Andy was a policeman. He assured us that we should not be concerned and that he drove like a madman, too. Once the hose was replaced , we traveled back to Leavenworth, along the twisty  back route for the third time. With Andy driving as fast as us.

Andy has forsaken the straight line days of drag racing for the curves and BMWs. And Gail is a wife who doesn’t mind car club events. In fact,  she comes by it naturally. Her father has been active in the Packard Club for years and Gail used to be in the Corvette Club. She notes that Corvette Club members love what their cars do for their image while BMW Club people really love the cars, and are nice people besides.

In May of 1985 Andy and Gail hosted our first Victoria Tour. Six cars from the states went north, crossed to Victoria on the ferry and had a won­derful time. This began a tradition that continued through 1988. The Victoria Tour includes a big dinner on Satur­ day night, plus a driving tour and shopping or sight seeing.

During this year’s tour, in April, Andy was having some health prob­ lems which had been bothering him off and on since November ’87. He didn’t let on while we were there, but in May he went back to his physician. Bladder cancer was diagnosed. More tests were done and then a month of radiation therapy was d one to isolate the cancer and stop its spread. On August 26th Andy underwent a six hour operation to remove his bladder and prostate . His recovery has been as good as can be expected. Aided, no doubt, by his excellent attitude. He’s got a bag which collects his urine and which is now just an accepted part of his life. It doesn’t stop him from drinking beer. In fact, when doing serious brew pounding, he jokes that he just hooks up a hose and runs it out a window. His prognosis for a normal life is excellent and he should be back to work before Christmas.

With all this in their lives, the David­ sons have had to beg off on a fifth annual Victoria Tour. But maybe  in the Spring of ’90 we’ll re-establish the tradition. In the meantime, let’s  all wish the Davidsons well. If you want to send Andy, Gail and Whitney a card during the holidays, their address is:

True enthusiasts  and great compan­ions. That says it all about our good friends, Andy and Gail Davidson.