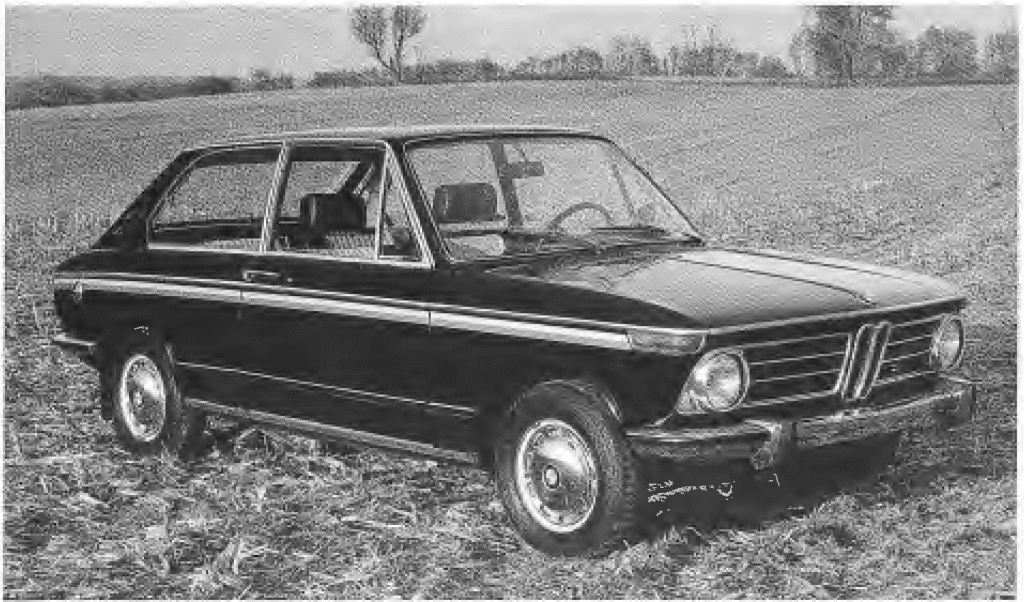 Ed. note: Our 2002 series continues. This is the second half of an article that originally appeared in Automobile Quarterly.

The tii’s introduction was celebrated with an update of the 2002’s classic good looks. New side trim and bump­ ers appeared, along with a price of just over $4000. For about $400 more than the 2002, sporting buyers received the tii’s Kugelfischer mechanical fuel in­jection adapted from BMW’s bigger European sedans. Highlights included more torque, an additional 34 bhp and a redline that was 300 rpm higher on an engine that already seemed readily capable of wrapping its tach needle twice around the dial. The tii borrowed its 1.4-inch-wider track from the ti. To accommodate the new power, a heavy­ duty clutch, front axle spindles, H­ rated Michelin XAS tires, wid er wheels and better brakes were part of the package. A new four-speed gear­ box also appeared,  along with two rarely seen options: a ZF-built five­ speed and a limited-slip differential.

Of course, most road testers – by now expecting nothing less than a guided missle from BMW – had a field day. Road & Track testers ran a tii against an RX-2 and an Alfa 1750 (the only real contenders in the class) and concluded that it was virtually no contest, despite the 2002’s $1400 higher price tag. However, acknowledging that the Japanese competition was get­ ting better, they began what would become an oft-repeated litany on the importance of value for money. On that issue, watching BMW prices spi­ ral skyward, Road & Track was regret­ fully starting to give the value edge to Japan.

Sadly, as U.S. emissions regulations stiffened, BMW ‘s horsepower de­ creased. By 1972, a stack of mandated modifications, including a slightly reduced compression ratio, made the cars slower, so much so that the follow­ ing year, the factory introduced cylin­ der heads with the famed trispherical turbulence-inducing combustion chambers already seen on its sixes. In the German language, with its wonderful propensity for combining words, this feature was called Dreikugelwirbel­ wannenbrennraum. Basically, this , meant that the 2002’s  carburetor, leaned out and matched with the new heads, could once again be certifiable without an air pump or exhaust gas recirculation.  Thankfully,   coughing and stumbling under acceleration were eliminated as well.

Overseas, BMW broadened it pro­ duct line even more with the introduc­ tion of an 1802 (1766cc 90-bhp) inter­ mediate version and, to keep the nomenclature straight, the 1600-2 became known as the 1602. Continen­ tal customers had delightful open-air versions of the 2002 series, built by Karosserie Baur of Stuttgart, to con­ sider. Two hundred full convertibles were built from 1967 to ’71 as well as 2517 cabriolets with a rather bulky targa center section that incorporated a lift-off top and a fold-down rear win­ dow. Due to increasingly stringent DOT regulations affecting converti­ bles, these cars were not officially im­ ported to the United States; those few that did make it here still cause a mild sensation whenever BMW enthusiasts gather. Even fewer examples of another 2000-body variant, the Touring, found their way to the United States. Built from 1971 to ’74, the Touring was a stodgy two-door hatchback, and it never really caught on anywhere, even though it could be ordered with a tii motor. Buyers preferred their 2000s in the “classic” notchback version. (BMW has recently announced that a similar hatchback will appear on its 3-series. Perhaps after 20 years the climate has changed.)

In the early Seventies, the word was established that 2002s were really hot performers that transformed merely good drivers into great drivers. The car ‘s growing reputation was enc­ hanced by lots of far-from-modest advertising. Consider a typical ad, from a campaign in Car and Driver. A 2002 is seen blasting through a turn. The one-word headline says: Guts.

Another  ad from the  same series shows an elite-looking Bavarian stand­ ing proudly by his 2002 in a Black Forest   setting.   The  non-too-subtle headline  states: “If you  know  about BMW, you either own one or you want one.” The text, of course, confirms “… if you’re planning to buy one, congrat­ ulations. You know a lot about cars.”

Tht type of promotion hooked the fanatics first. And the early 2002s really delivered the goods. Unfortu­ nately, BMW had to meet the increasingly  demanding  EPA  regulations. That meant the cars continued to lose their punch. European 2002 tii’s at this time packed  147 bhp. The first U.S. versions lost 7 bhp crossing the Atlan­ tic and, by 1973, horsepower dwindled to 125; model year 1974 saw the addi­ tion  of heavy five-mph  bumpers  – along with a handsome restyling that featured  distinctive  rectangular  rear tailights.  And  BMWs  became  even slower that year. An all-new car was the only answer, and that would come with the 1975 3-series’ introduction in Europe. 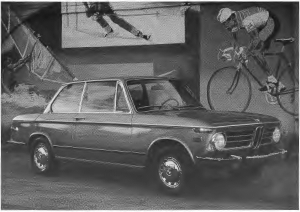 But before the new car bowed, BMW had one last go-fast trick up its sleeve for the 2002: a turbocharged version called, appropriately, the Turbo. Munich’s irrepressible engineers start­ ed with a 2002 tii engine and dropped the compression ratio from 9.5: 1 to 6.9:1. The Kugelfischer injection sys­ tem remained, joined now by an 8-psi KKK compressor. With a claimed 190 bhp, the Turbo was hardly slow, and it really jumped in the upper ranges; 0 to 60 time dropped to 7 seconds and top speed,  with  a  new  rear  axle  ratio (3:36:1 vs. 3.64:1), was just over 130 mph. There was some turbo lag, but BMW fans loved the car’s rocket-like surge of power once the turbo spooled up. Writing in Britain’s esteemed Car magazine, Georg Kacher said the Turbo was “. . . the most desirable BMW this side of the 507.”

Turbos came with an arrogant reverse-lettered front air dam so peo­ ple in cars that were being overtaken couldn’t miss the name of their pur­ suer. The reverse letter was considered a bit much even by BMW loyalists, however , and  it was dropped. Non­ etheless, the car’s boy-racer reputation was reaffirmed with its flared fenders and rear spoiler. As a qualifier, the factory literature stated the car was for “chiefly sporty persons .”Buyers could further opt for alloy wheels, a five­ speed gearbox and fatter tires. Unfor­ tunately , the Turbo retained the tii’s rear drum brakes, which were inada­ quate for its speed.

BMW couldn’t have known it, but its timing couldn’t have been worse. The 2002 Turbo was a fuel-hungry car when people knew they had to conserve gas. The OPEC oil embargo plunged the world into a frenzy over fuel efficiency. And, slick though the Turbo was, BMW’s sophisticated six­ cylinder coupes were far Jess nervous and much faster, and they handled and stopped better. The Turbo was dropped at the end of 1974 after 1672 examples were built. None were officially im­ ported into the United States, but some inevitably found their way here. Today, they are considered the most valuable 2002 collectibles .

In 1975, Munich quickly produced yet another 02, this one in response to the fuel crisis. The low-compression, 75-bhp 1502, built along with the new 3-series, was a bread-and-butter , un­ trimmed base version of the same 2002 that took his country by storm. Thank­ fully,  the  1502  never  reached  our shores. By contrast, product planners at BMW, hedging their bets, made cer­ tain the more expensive 3-series were well and truly launched in this country. After  a successful eight-year  run, even the most loyal of loyalists knew the 2002 was nearing the end of its life. And they eagerly awaited its successor. North  American  2002s soldiered  on through  1976. The ’75s are generally acknowledged   as  the  worst  of  the breed,  due to their  strangling emis­ sions controls.  Thankfully, the ther­ mal reactor was dropped for 1976, and a rear axle ratio change (from 3.64: 1 to 3.90: I) made the 2002’s acceleration faster though it reduced the car’s top speed. Interestingly, the tii’s top price, at the end of its run, had doubled from its inception to over $6500. Max Hoff­ man, who had fathered the 2002, was bought  out  by  BMW  AG  in  1975. Munich wanted tighter control over its increasingly  prosperous  U.S.  subsi­ diary, so the company created BMW North America, rewarded Maxie hand­ somely and soon established its own headquarters in New Jersey. 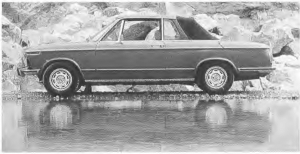 When the 3-series finally appeared Stateside in 1977, BMW loyalists had mixed feelings. The new car was heavier, bigger, quieter, more  expensive ($8000 to $9000, depending upon options chosen) and, worst of all, slower than the 2002 tii. That wonder­ fully Spartan sportiness of the old cars had been engineered out. BMW firmly believed it was now appealing to a market segment that still looked for some performance, but most of the 320i’s new buyers seemed to want their joy in comfort.

In 1972, when the 2002tii, Alfa 1750 and Mazda RX-2 squared off in Road & Track, BMW had precious few competitors in the class it had practi­ cally created. This changed as other manufacturers recognized the special opportunity in that class. By the time BMW’s 320i bowed, entries from Audi, Fiat, Saab, Volvo and Lancia had joined Alfa and Mazda to greatly expand the small-sports-sedan class.

To the dismay of many enthusiasts, BMWs steadily increased in price, abetted by a cooperative dollar / Deutschmark ratio. Yet sales still soared . BMW had become the “Ulti­ mate Driving Machine,” and even if its speed had fallen, most Americans, laboring under the 55-mph speed limited, couldn’t test the 320i’s mettle in any case. German buyers still had 125-bhp 320s and soon could buy the lightning-quick 323i. Yet many people, still convinced that the 2002 was the best BMW ever produced, regret they cannot  afford  the  heady  prices  of today’s BMW’s, and they lament the fact that Munich will never build a car for them again.The BMW Car Club of America Inc. is loosely divided with the 2002 enthusiasts in one camp and contemporary BMW fans in the other.

The club, with over 20,000 members, has no official connection with BMW North  America;  however, Rob  Mitchell, BMW NA’s product informa­ tion manager, is a solid 2002 fan. “Besides bringing affordable high per­formance to a mass audience,” he says, “the 2002 really set the character of the company. Before its inception, only enthusiasts -and well-heeled ones, at that -knew about BMWs. After the press picked up on the 2002, word-of­ mouth among new owners spread the news about the car like wildfire.” 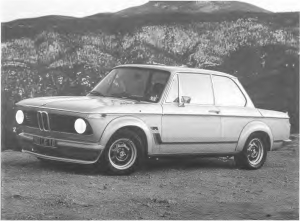 Many of today’s diehard 2002 owners have updated their cars with five-speed gearboxes from later BMWs, fatter wheels and stickier tires, performance seats, multiple Webers and other en­ gine goodies. They still go gunning for 318is and 325es. Supported by·equally enthusiastic aftermarket suppliers, these loyalists know their 2002s will continue to provide driving thrills.

BMW NA ensures that spare parts are available for the now vintage 2002s. “Sure, we still support the car,” Mit­ chell says. “There are a lot of them left and they belong to highly vocal enthu­ si  sts.  BMWs  are  more  expensive today, so many of the present 2002 owners are no longer our customers. But that’s happened to a lot of com­ panies, Porsche for one. Let’s face it: Everything’s much more expensive today.” BMW’s new M3, a highly developed lightweight, twin-cam, four­ cylinder coupe introduced in the Uni­ ted States in mid-1987, has been touted as a reincarnated 2002, at least in spirit. Its price tag is nearly 10 times that of a tii. “And it’s probably 10 times the car,” Mitchell says, not unkindly. “Besides, the M3’s a thinly disguised racer – not a quiet pocket rocket  that  you’d  have  to  drive  to discover.”

The factors that created the 2002 are gone today. And the market is much more competitive. Wisely, BMW con­ tinues to set the pace. If the company ever falters again, it needn’t look far for inspiration. Waiting in the wings is a ghostly legion of well-preserved 2002s backed by fanatically loyal owners, who stand guard over BMW’s high­ performance image. “We keep them honest,” 2002 drivers like to say, con­ firming that the spirit of the plucky 2002 will always be looking over Munich’s shoulder.