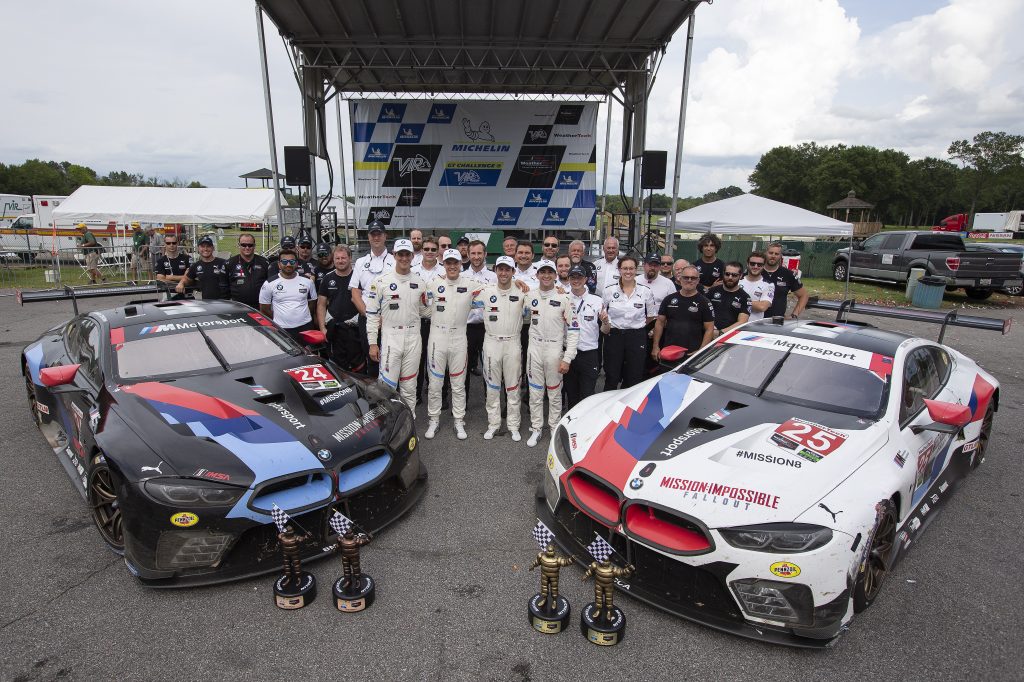 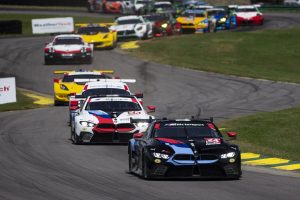 Nine races into the inaugural racing season of the newest BMW race car, BMW Team RLL added another entry in the record books by delivering the first victory and first double podium finish for the all-new BMW M8 GTE at the Michelin GT Challenge at VIR.

The No. 25 BMW M8 GTE, driven by Connor De Phillippi and Alexander Sims, completed 88 laps of the classic Virginia International Raceway two-hour-and-forty- minute race, winning with just a 1.323 second margin of victory. The No. 24 BMW M8 GTE, with John Edwards and Jesse Krohn co-driving, finished a very strong third, only 4.439 seconds behind their teammates, to cap a very exciting weekend. Opening the race in a big way, starting drivers Edwards, in the No. 24 BMW M8 GTE, and De Phillippi, behind the wheel of the No. 25 BMW M8 GTE, rocketed forward at the green flag to move into the second and third positions respectively. De Phillippi’s jump from his fifth place starting position earned him the VP Fuels Stand on the Gas Award.

Edwards inherited the lead when the No. 67 Ford GT pulled off with problems on lap 28, pitting one lap later to hand off to Krohn. De Phillippi pitted on the next lap, handing the No. 25 M8 to Sims.

At the one-hour mark, Krohn raced in second position, Sims in fourth. Sims was slowed by an off-course excursion and a resulting collision with a GTD car that ultimately caused him to serve a drive-through penalty on lap 39. Not to be denied, the British ace and the team set upon a plan to get back to the front. Sims pitted for fuel and tires under the race’s only caution period while Krohn stayed out, now in the lead. Krohn pitted on lap 54, returning to the fight in fifth. By lap 62 the large crowd at VIR could see that today would be BMW’s day. Sims, now in the lead, built up a 45 second gap to the balance of the GTLM field following the next round of pit stops. Krohn had charged from fifth to third by lap 65 while Sims, counting on his Michelin tires to double stint, took advantage of his margin to pit for only fuel and deliver the first win for the BMW M8 GTE by just over one second.

“First and foremost, congratulations to all at BMW Team RLL.” said Victor Leleu, BMW of North America Motorsport Manager. “The race demonstrated a flawless execution from the crew, engineers and drivers. Everyone has put their heart and soul into the M8 GTE program and we couldn’t be happier we were able to deliver the car its first-ever win at VIR. The team has had to adapt to a lot of changes with this new program. We had a few challenging races this year but no one ever doubted the potential of the new car from day one. Even after the cruel result at the previous race at Road America, everybody felt strong and kept plugging away, knowing it was just a matter of time. Today is that day! I’m very proud we proved the worth of the all-new M8 GTE against the most competitive GT field in the world.”

“Great team effort today! Everybody did an excellent job!” said Brandon Fry, BMW Team RLL Technical / Racing Operations Director. “We had a good pit stop strategy and the drivers did an awesome job. This is something we’ve been working

towards for a while and we have had some bad luck go our way but everything finally came together today. So, good job by everybody. Super proud of the team!”

BMW’s partner, Rahal Letterman Lanigan Racing, based in Hilliard, Ohio and co-owned by three-time IndyCar Champion and 1986 Indianapolis 500 winner Bobby Rahal, former CBS Late Show host David Letterman and Mi-Jack co-owner Mike Lanigan, has been competing for almost three decades. Prior to the start of their 27th season of competition in 2018, the team had compiled 42 victories, 53 poles, 162 podium finishes, three series championships (1992, 2010, 2011) and claimed an Indianapolis 500 victory (Buddy Rice in 2004). In 2009 the team joined BMW of North America to campaign the new BMW M3 in the American Le Mans Series. The following year the team won both the Manufacturer and Team Championships in the GT category and swept all three GT titles – Manufacturer, Team and Driver – in 2011. In 2012, the team finished second in the Team Championship and third in the Manufacturer Championship and in 2013, the team finished second in the Driver, Team and Manufacturer Championship. Since 2014, BMW Team RLL has competed in the GTLM class of the IMSA WeatherTech SportsCar Championship with a two-car program and has brought their total to 17 wins, 23 poles and 68 podium finishes as well as a second-place finish in the Manufacturer, Team and Driver championships in 2015 and 2017.