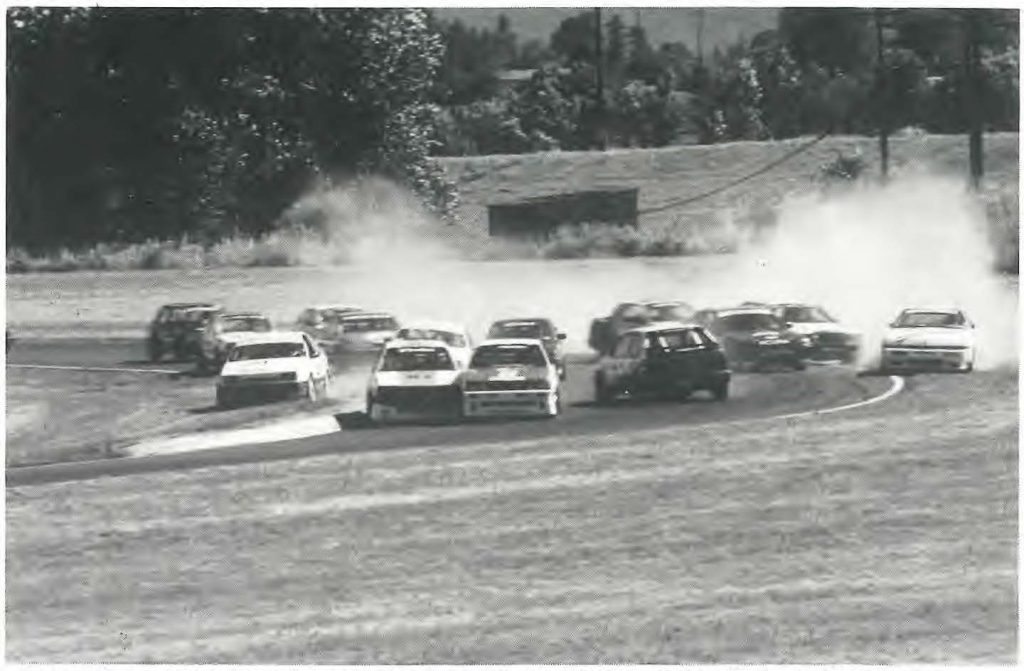 This years’ IMSA races at Portland International Raceway were a two day event. The first day featured three races highlighted by the Firestone Firehawk race for Showroom Stock cars. The highlight of the second day was the main event, the Camel GT race with GTP and Camel Light cars.

The first day got off to an exciting start with a motorcycle jump by Robby Knevil. Robby Knevil is the son of Evil Knevil of motorcyclejump­ ing fame, or motorcycle crashing imfamy depending on your viewpoint. Robby was out to break his fathers record of jumping over 21 cars success­ fully by trying to jump 22 cars and landing safely. With some advice from his father, Robby proceeded to warm up his bike by doing some long wheely runs. On his attempt he got a good run at the takeoff ramp, hit the ramp squarely in the middle and went flying. While in midair he thrilled the crowd by removing his hands from the handle bars. He made a perfect landing on the landing ramp clearing all 22 cars with ease. The crowd, including a number of race drivers and pit crew, gave Robby a rousing standing ovation.

The first race of the day was a Fire­ stone Firehawk City Challenge race. This is a race where all the cars are exactly the same, similar in concept to the IROC series. An added twist, how­ ever, is that there are teams in this race

representing  different cities. So not only are the drivers going for the win in the race but they are also trying to place as highly as possible to score points for the team. The top teams at the end of the season will be rewarded with cash prizes. That little incentive keeps the racers that are not battling for the lead racing against other city teams racers to score points toward the team title.

The second race of the day was the International Touring Sedan race. The format for this race series is essentially the same as Showroom Stock. In this series, the cars are allowed a couple more modifications than in Showroom Stock, but they still run close to the same lap times as the Showroom Stock cars. The start of the race saw a good start from everybody in the field. They came roaring down the front straight three and four abreast and practically bumper to bumper. As they came into the first turn, one of the lead cars lost control and started to spin. This caused a wild eyed panic with the rest of the pack. Cars were going everywhere, on the inside of the track as well as the outside of the track. Other drivers slammed on their brakes causing still more cars to spin. Some tried to weave their way through the mess. After the dust had settled, the chaos at the first turn had inflicted enough damage on the two front row Mazdas that they had to drop out. The three Acuras in the race preceded to take control and run away from the field. The only item of interest for the rest of the race was a lone Mercedes  climbing  through  the field to eventually finish fourth. There was a BMW 325iS running in the race, but it was never in the hunt, and finished the race mid-pack.

The final race of the day was the main event Firestone Firehawk Show­ room stock race. Featured in this race was Ray Korman driving a BMW M3. In Showroom Stock racing the cars that race are pretty much as you would see them on the road. A few modifica­ tions are allowed such as different brake pads, shocks, and sway bars. The cars can run open exhaust and the engines are blueprinted (that is every component of an engine is hand worked or picked to meet exact factory specifications). 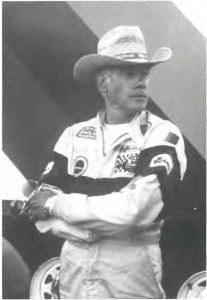 I went to the pits before the race to look over Korman’s car. I was a bit surprised by the bright and unusual paint job. For those of you that have seen the August 15 issue of Autoweek, you know what I am talking about. The paint job is by an artist who was commissioned by BMW to do Kor­ man’s car and another just like it that is on display in an art gallery. I had an opportunity to talk to Korman’s co­ driver for the race, Willie Lewis. In talking with Willie, he stated that he didn’t think that the M3 had much of a chance of winning the race. He said that the Firebirds and Camaros just had too much tire and too much brake for him to be able to keep up in the corners and in braking. Also the M3 didn’t have the top end speed to match the GM cars. Willie said the only hope for an M3 win would be if all the GM cars broke or crashed, and that wasn’t too likely. The race itself was a three hour enduro and the rules stated that there had to be a driver change. Kor­ man had qualified the M3 in eleventh position on the starting grid. There was another M3 in the race and it had qualified in the eighth starting spot.

At the start of the race both Korman and the other M3 lost a few positions to hard chargers at the first corner. Korman and later Lewis drove a good steady race and in doing so managed to bring the M3 home in fifth place. The other M3 was not so fortunate. It was off the pace the whole race, so much so that Korman’s M3 was lapping it. To make matters even worse, late in the race the car was hit from behind by a Porsche 944 and spun off the track.

Talking with Ray Korman after the race shed some light on why the GM cars were so dominant in this race. First of all Korman didn’t know about noise restrictions at PI R. After arriv­ ing at the track he had to quickly stick on a set of baffles to meet the noise restriction levels. This cut down on his top end power making it impossible to stay with the GM cars down the straight. Also, this season the Fire­ birds and Camaros had bigger brakes and tires than they did last year giving

them the edge in cornering and brak­ ing performance. After last season, GM simply put the bigger brakes and tires on a bunch of cars and shipped them out to dealers to sell. In that way they were able to produce enough cars with the bigger brake and tire combo to qualify them for Showroom Stock racing. BMW, being a small company, just couldn’t respond to the GM updates. (GM sells more Firebirds and Camaros than BMW sells cars in the US in one year.) The M3 also has a problem of oil usage. Running at con­ stant high rpm’s causes a lot of blow­ by. This blow-by picks up oil vapor in the engine andblowsit outthe breather tube. Korman said that they couldn’t solve the problem by simply adding more oil because the oil level is so close to the crankshaft that if they put in more than half a quart of oil extra, the crankshaft would hit the oil and cause it to foam creating even worse prob­ lems. So at each pit stop the crew has to add half a quart of oil to the engine to make up for the oil vapor lost during the race.

Another problem that they had to overcome was the brakes overheating. The stock rims just didn’t allow enough air to circulate and cool properly. He found that the brakes were making so much heat that the rubber valve stem would start to melt. He had to switch to metalvalve stems to cure that problem.

Looking at Korman’s car after the race revealed a large dent, about the size of a softball, just below the right C pillar. Also, all along the right rear quarter panel were scratch and scuff marks. Neither Korman nor Lewis could remember any incident that might have caused the damage, which goes to show you how hard they were concen­ trating on the race.

Next month I’ll tell you about the second day of racing, some interesting sidelights to the races, and a little about Portland International Raceway itself.