IRDC vs. BMWACA – A Comparison of Driving Schools

IRDC vs. BMWACA – A Comparison of Driving Schools

This magazine is becoming a valuable resource for the BMW owner con­cerned with getting the most and best for his dollar. Last month it was a comparison of the Yugo, Hyundai, and BMW M3. This month we con­tinue this reader service with a compar­ison of two local performance d riving schools.

The International Race Drivers Club sponsors a series of amateur auto races i n the Pacific Northwest. The “International” part of the moniker is derived from occasional forays to B.C. A local rival to the national Sports Car Club of America , the I R DC provides man y similar services, but offers more for the novice d river. Among their events is a high-performance d riving school held annually at Seattle International Raceway . The school is a one-day session held in the spring, prior to the racing season, and although geared  toward the person  interested  in  amateur  rac­ing, it is open to any licensed d river with an interest i n becoming a more competent pilot of his vehicle.

The Puget Sound Chapter of the BMW A utomobile Club of America provides a high performance d riving school for its members only, although mem bers of affiliate organizations may participate if space is available.  The site is S.I. R ., the class is provided twice a year, once in the spring and once in the fall , and is usually two d ays long. It,too, is geared toward novice d rivers, although t here have been ru mors that a separate section for advanced d rivers may be formed in future events. Few of the partici pants are future amateur racers. They are merely d rivers with a d esire to improve t heir skills, to more competently and precisely hand le the thoro ughbreds  they own.

The author,  a  veteran  of  four BMW ACA d riving schools, had an opportunity to attend an IR DC school two years ago when a scheduling conflict prevented attendance at the BMW function. H ow do the schools compare? Surprisingly, they are very similar in format, and impart much of the same knowledge . 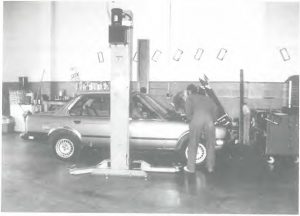 The foremost concern of both organ­izations is safety. To this end, both have a ground school, at which attendance is mandatory, a few days before the actual track experience . This ses­sion is used to discuss theory of driving skills (as in most sports, a thorough theoretical understanding of the sport is the most important skill to gain); to discuss rules and regulations for the track d ay; and to familiarize partici­ pants with the layout of the track, and what areas may pose safety hazards to the unaware driver. Both classes em­ phasize that the school is not a race session, that cars are not allowed to approach each other closely, and there are strict rules restricting passing of other vehicles. In both schools, break­ing the rules is grounds for immediate dismissal.

The content of the ground school sessions is about the same. Quality is heavily dependent upon the teaching ability  of  the  instructor,  which  will vary from year to year. For the last several years, the BMWACA has been fortunate to have Byron Sanborn , a top-caliber local race driver and long­ time club member, lead the  ground school. His presentations are clear, precise , and articulate, while impart­ ing a sense of fun that was absent from the IRDC presentation . So for the ground school the nod , by a small margin, goes to the BMW ACA.

Again  in  the interest  of  safety, both organizations  run  the  participants’  cars through  a technical  inspection.  In bot h schools,  it  is  not  important  how  fast your  car can go.  I  have  seen underpo­wered    examples    (and    brought    one myself)  at  both  events. The concern  is whether  your  car  may  cause  a  hazard to  yourself  and  others,  so  all  cars  are checked   for   potential   problems   t hat can occur at high speeds. Both schools . check  that  tires  are adequate  for track speeds,   and   that   there   are  no   loose objects  or potential  points  of  mechanical  failure  in  the  engine  compartment. The   BMW ACA   raises   each   car   to check undercarriage, suspension, and wheel bearings. The IR DC  encour­aged participants at the ground school to check those items they would not have time to check .

The most striking difference is the amount of thought that had been given t he scheduling of t his task.  The BMW ACA inspects your car while you are being entertained  and edu­ cated by Messrs. Sanborn et al, and each participant is given a checklist of items that need attention when the car is picked up after the grou nd school. This gives the participant time (usually about 10 d ays) to correct any problems before track session. It also red uces the inspection at the track to checking tire pressure and making sure all loose objects have been removed from t he passenger  compart ment.  The  IR DC d oes all inspections at the track on the d ay of the class, which leaves no time to correct problems found, and pro ba­ bly means t hat marginal problem cars are more likely to be permitted to par­ ticipate. And, of course, extra time spent on inspection comes out of t he time you, the d river , spend beh ind t he wheel. This is one aspect of t he event where the I R DC (and , I suspect, many other d riving schools in the nation) could learn from t he BM W ACA. 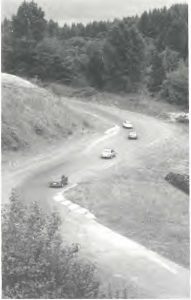 What happens at the track after the inspections? In the IRDC all partici­ pants were run as a single group through a slalom, a collision avoidance man­ euver drill, wal ked the track , were given exhibits of the correct line through the track by as driven by 3 race drivers (as students watched from the side­ lines), and t hen d rove the track with at least 3 different instructors before being allowed to solo.

The BMW ACA breaks participants into small groups, each of which prac­ tices on a skid pad, slalom, collision avoid ance, heel and toe downshift and weight t ransition d rills. In a two-day course an autocross is often tossed in to combine all skills learned into one tight practice session. Although  they are encou raged to practice driving the full t rack with more than one instruc­ tor, partici pants have one “homeroom” instructor for the session, who m ust sign their log book before they are allowed to solo.

Again, the content is very similar. The collision avoidance d rill was being used for the first time bv the IR DC when I attended. Lane change signals were made by an instructor on the flagging tower. It added an extra ele­ ment of challenge to pick u p a signal at 10 o’clock and 15 feet off t he grou nd, then return attention to straight ahead to find a route through t he cones. A lot of time was spent replacing the cones, and valuable time for d riving expe­ rience was lost. As a result the d rill was not well received (after all, collision avoid ance usually means respondi ng to events in the cars path, not out the d rivers’ wind ow) and it may not be used again by the IR DC.

The skid pad is probably the event most BM WACA partici pants like best of the individ ual station d rills , and one t hat always ends too soon. It provid es insight into what happens beyond the normal hand ling limits of you r car that cannot  be experienced  anywhere  else on the track without danger to yourself and your car ‘s all to precious sheetmetal.

I had expected the IR DC to be more for m a l and orga n ized t han t he BMW ACA , and, to my surprise, found the opposite to be true. The smaller groups used by the BMW ACA allow them to run more people through more d rills , providing much more “behind the wheel” time for each participant. Also, riding the correct line as a pas­ senger in an instructor-piloted car imparts  far  more  information   than wa tch ing an inst ruct or from t he bleachers .

In teachi ng the line, the BMWACA has a d istinct advantage over the IR DC. All BMW s handle similarly , and wou ld d rive approximately the same optimal line t h rough the track . The IR DC participant’s car may have front or rear wheel d rive, may be stock, be a quali­ fied stock racer, or a formula racer. All would take d ifferent lines through the course. And all instructors taught a different line through the cou rse. Some advocated t rail braking,  others  were ad amant that  it  not  be  used.  This d iversity of instruction , while fascinat­ ing to a potential racer, would be frus­ trating and bewildering to a novice , so the BMW ACA approach of one in­ structor for the whole cou rse works well. I n the IR DC course, be sure to corner an instructor with a good repu­ tation who d rives a car most li ke yours, and take his instruction more seriously than the rest.

All of the IRDC instructors are cur­ rently active racing d rivers. In the BM W ACA class, a few are, b ut most are merely experienced track drivers. The I R DC instructors tend to offer more specific suggestions d uring the in-car sessions, but their strategies are often oriented toward racing in spe­ cific, and are sometimes not applicable toward the environment at BM WACA open track . The ability to d rive d oes not carry with it the ability to instruct , and since both organizations use volu n­ teers, not professional instructors, the quality is about the same, with a slight edge going to the IR DC for the aggres­ sive d ispensing of advice.

Upon successful completion of the IR DC course, each participant gets an impressive d iploma and the right to particip ate in regional amateu r novice races . Given the amou nt of time spent behind the wheel during the school, an early season novice race m ust be a pretty scary place to be.

Once a BMW ACA student has achieved Level I skills, their log book is signed by a qualified instructor. This almost alwa ys t akes two or mo re schools to achieve. This confers the right to drive solo at future BMW ACA track events with the Level I group. And even then, you don’t get to race. But you can have a heck of a lot of fun while practicing skills learned at the school wit hout fear of damaging your cars skin.

If you are interested in amateur rac­ing, the I R DC course is a prerequisite. Try it, and let us know what you think. I n my opinion , grad uates of the BMW ACA school receive more artic­ulate instruction, participate in a bet­ ter equipped and organized school , receive more “hands-on”  experience for their time and money, and, as a result,  are  better  prepared  for  track driving.