Nurnburgring 87 – Just A Family Drive In The Country 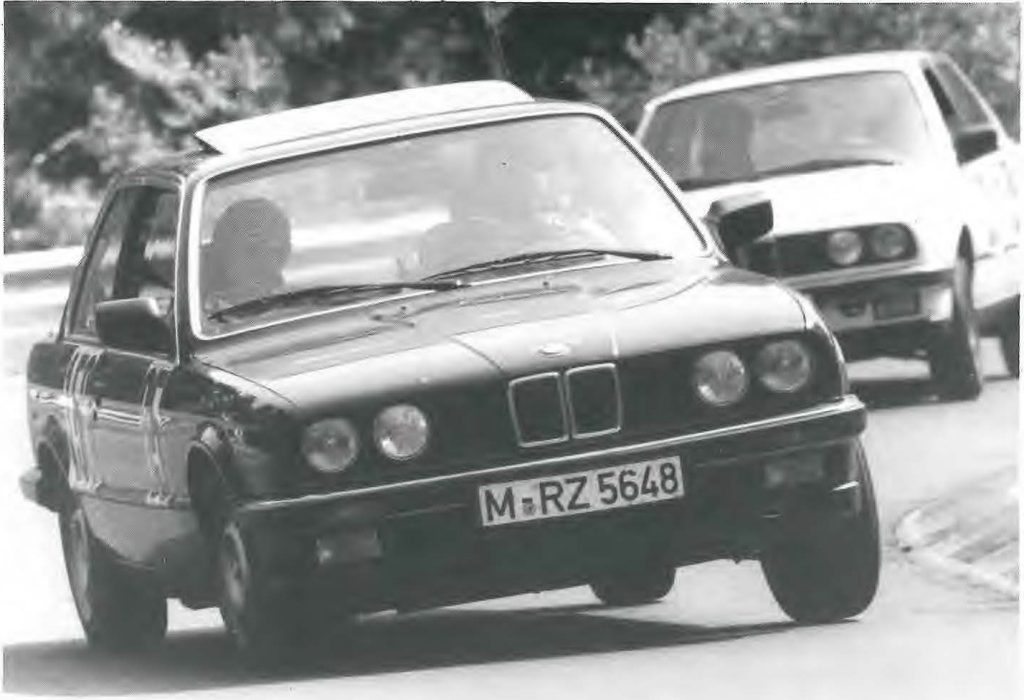 Nurnburgring 87 – Just A Family Drive In The Country

Those that know me will agree that I talk a lot – especially when I’m excited about something . . . like Bimmers. When we got to the car rental desk at the Frankfurt airport, sporting BMW patches all over our jackets, and with kids and bags stacked like cord-wood on the hand carts, our exhaustion was eclipsed by our excitement as the very polite clerk got our reservation paper work and the key to our Opel (which at over $100 a d ay was all we could afford for the week of travel while getting to Munich to pick up our BMW) I was babbling on about how we’d come all the way from Seattle to join other BMW Club members for a 4 day driving school at Nurnburgring and we were so excited about driving such fine cars at speed. The clerk asked me if I had a BMW back home in the States. Glad she had t he time for me to list them. She was sincerely amazed. She reached  back  to  the  keyboard  and handed me a BMW key with a smile apologizing that it was only a 3’er, but we could have it for t he same rate . Did we take it? Does a tii smoke on trailing throttle . . . ha  . . . ha . . . ha!

The terrain and scenery is very similar to t hat of Western Washington . The highway speeds are doubled and then some. It’s a bit of a squeeze for all of us i n a 2-door 325i but t he children are still  small enough, and what-the­ hey, a little suffering builds character. Melinda our very trustworthy baby­ sitter has accompanied us on the journey and is strapped in as a partition between the kids in the back . Did you k now you have to be 12 years or older to sit u p front in Germany?

On the trip to the track, we volunteered to ferry up a “spare car.” So for several hundred kilometers, I felt like a chauffeur with my nine year old daughter Anathea sitting in the back. Actually she was a very good navigator with maps all over the seat.

The June weather had a few surprises in store. Have you seen the dash­ plaques that say “don’t open windows over 125 mph?” Well, we learned the wet way the sunroof wouldn’t close above 75 mph. The little wind-whistle strip would lift up just enough to jam the mechanism . We were in and out of showers half of the day. Showers that reduced visibility to a couple hundred feet. At the prevailing speeds I felt like I was making an instrument approach to Paine Field, not just looking for the exit at Koblenz.

Twice we stopped due to a back­ firing type noise that only occured dur­ing rain . It sounded like the tail-pipe was under water and sometimes the resonance was enough to be felt through the steering. Rest stop ahead, check the engine compartment . . . maybe a loose plug wire. On to next rest stop . . . check the under-carriage and exhaust. All temperatures, pressures and indi­cators were good, but at speeds above 100 kph . . . ka-pow . . . ka-pow. Finally got into such a cloud burst all traffic was at 50 kph and I had to seal the sunroof tight . That fixed it! The sound was generated by water drops getting sucked through the sunroof drain tubes at speed. Yes, you can have the two­ way roof popped up a bit and not get wet if you don’t mind the noise.

Most  of  the  time,  the  kids  were either sleeping, or playing,  but now there was a certain electricity in the air. Belts on tight, all unnecessary items stowed.  Green  flag  at  the  ready,  a quick glance at the track steward found a smile not a frown. I didn’t want to get a black flag at the start-box, as we had the whole d amn-family in the Bimmer for my graduation lap. Actually, I felt it would help me as I would be talking the  kids  through  all  the  situations, before each comer. My concentration would be up and my speed down a bit.

We get the flag and knowing this lap is for style not for speed, I only lurch moderately as we head off. Our child­ren have ridden with us at road-course tracks in Seattle, Portland and Van­couver B.C. We weren’t about to deny them the opportunity to ride-round­ the ring. 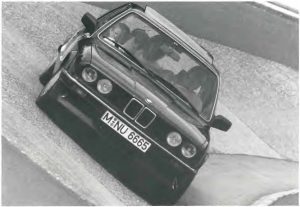 Just another family  drive? Hardly! Here thefamily  experiences the G-forces  of a power-on  trip through the high banking of the Nunburgring’s famous  Karussell.

Marilyn, my wife and navigator, said the expressions on the judges faces were hilarious as we flew through the S’s, round curves, up cliffs, hot-footed it past Hatzen Bach, slid by the Schi­ kane, flew over Flugplatz, forged the Adenauer Forst, met up Mit Metges­ feld, aileron-rolled about the Karus­ sell, wept at Wipperman, saw a 323i planted  at  Pflanz-Garten,  and  rolled u p to the pumps in the pits. Took out 3 dishevelled bodies, and took on 40 litres of 104 octane at about $2.70 a gallon.

Then back inline with Marilyn at the wheel for her lap. This could have been just a dream. Just d riving the 4.54 km new formula-! track at Niirnburgring with its 14 corners and 9% incline would be a dream . Add to that the 20+ kilometers of the old track and its zil­ lion curves as it traverses the spine of a series of hills about a natural bowl. The track is so large, there are 4 towns and a couple villages inside of it. The elevation changes and roller-coaster lay-out allow acceleration that is unreal. Only the very bold can hold open throttle on much of the track. Speed sneaks up and often I find myself heavy into the anti-skid brake before realizing it.

Sound like a d ream you’d like? If you’re a BMW club member and you’ve survived some form of track-training, you should be eligible for the annual BMW Club Driving School held for the last 25 years at Niirnburgring. For details contact Ilse Dietel, the International Secretary, who is with the L.A. Club at (714) 493-9154. Or contact Dan or Marilyn Patzer of Bimmers Only at (206) 743-2002. I’ve been there 5 times and can give tips on travel and housing as well as the track event.

You have to act soon as the few (50 or so) positions for American partici­ pants fill up as fast as registration opens in January. The expenses vary from year-to-year. It’s by far the most training you’ll get for the money in live Bimmers that I know about.

In addition  to  the  walking-talking and d riving sessions on the track , there are several  confidence building  ses­sions, including a slickened skid pad for slides, skids, hand-brake turns, driving backwards-forwards . . . (just like in the movies) , lane change or avoidance situation . . . (short notice & high speed), and turning while braking. The most memorable for both Marilyn and me was the guard-rail collision training. That’s right in real BMW’s, you go out and properly hit a guard rail at speed. Turn around and hit it on the other side.

I mustn’t forget “Wild Willie” driv­ ing a 325ix four-wheel drive. He took us on interesting excursions between the black top and the guard rails dem­ onstrating that a car bobbling about on its suspension has little if any con­ trolability. So if I got this right, when you’ve totally lost it, you return the steering wheel to 12 o’clock center (some drivers put a piece of white tape on the steering wheel for quick ID of 12 o’clock) and just hold it there for an instant until the car gets back on top of

its suspension, then you’ll have some­thing which can be controlled. For training he’d have us violently turn the wheel 90 degrees or more at speed, then just center the wheel and wait for the world to catch u p, then just steer out of it. Do not attempt this in your own living room. “Wild Willie” is world famous for his patented rear suspension consisting of little full castoring wheels that go on where normal rear wheels go on front wheel d rive cars. Try driving a figure 8 on a banked surface as any sudden change of throt tle or steering causes the car to “helicopter.”

On any such adventure, anticipate some surprises. The tour bus left one Miami couple behind and it cost them $150 taxi fee to catch up with the group. When we arrived in Mu nich, there was no room at the Inn. Well, to make u p for that, when we got to Niirnburgring, there were people get­ ting our room ready. Unfortunately, it was their bags  they were  unpacking. Let’s talk about the good times instead. I  m ust  tell  you  about  the  wonderful resort-hotel Amerwald BMW has down on the Austrian border. It’s 20km from the nearest town d own a nice paved road albeit too narrow for a center stripe. The hotel is between Linderhof, site of the fairy-land castle and Reutte. Just a few km from a very large Lake Plansee arid nestled at the foot of the Austrian Alps including the highest peak in Bavaria the Zugspitze .

Naturally, I did all of this just so I could come back and tell you about it. It was a nasty job, but somebody had to d o it. As my seven year old son Phillip would say, “radical.”