This year’s banquet on November 19th promises once again to be a high­ light of the Club’s calendar. We have a fabulous lineup this year: another silent auction, the wonderful Denise Mc­ Cluggage as guest speaker, and a great location at Salty’s Alki.

Speaking of Salty’s, if you haven’t been to their Alki location, you’re in for quite a treat. Located right on the water, the restaurant offers one of the best panoramic views of the Seattle skyline available from any restaurant in the city. They have excellent ban­ quet facilities for up to 200 people.For our event, we have selected the Skyline Ballroom on the restaurant’s lower level. There should be plenty of room to mingle, and if by chance the weather cooperates, you ‘ll be able to walk onto a veranda which extends over the water and faces the city skyline. Spec­tacular!

But there is more to Salty’s than the view. The food is an attraction, as evi­ denced by the difficulty of getting prime time weekend reservations. We will have a choice of two entrees, hali­ but or New York steak. The halibut fillet has hazelnuts served with a sauce of white wine, cream and lemon. The steak is select Nebraska beef, corn fed and locker-aged. Both entrees come with a seasonal salad with vinaigrette dressing, new red potatoes, rolls and butter, and tea or coffee. Cost for either is $25 and by the end of the evening you’ll feel it was money well spent! Be sure to come early and take advantage of the no-host bar begin­ ning at 6 PM.

The speaker for our banquet is well­ known automotivejournalist and racer Denise McCluggage . She is an accom­ plished storyteller, and she will be tell­ ing us about a lot of her experiences both as a racer and writer. See David Lightfoot’s profile of Denise elsewhere in this Zundfolge. Also included is one of her recent columns, the subject of which is guaranteed to interest even those of a non-automotive bent.

Finally, we once again have a silent auction. This has been one of the high­ lights of the banquet the last couple of years, and this year’s should be a good one as well. Plans call for the auction to begin at around 6 PM (doors open). The silent auctions will end at various times, (approximately 6:45, 7:00 & 7:15). Dinner will be served at about 7:30.

All you need to do to get in on this is send in the registration form (or oth­ erwise indicate your entree choice(s)) along with your check so that it is received at the Club P.O. Box by November 17th. Ifyou have any ques­tions call Tom Williams (283-1056) or David or Lucetta Lightfoot (282-2641). See you on the 19th! 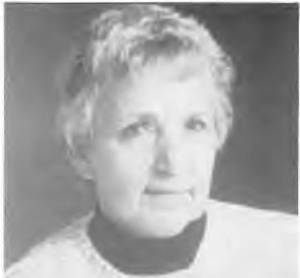 Well, folks, we’ve done it again. Another outstanding banquet speaker. Two years ago we had racer David Hobbs. Last year it was automobile columnist Satch Carlson. This year we’ve got someone who’s done both: raced with the best of them and wrote about it too. Our guest will be Denise McCluggage.

Denise raced extensively i n that golden age of sports cars, the 1950s. She now travels and is a freelance wri­ ter for a number of publications. When not on  the road she calls Santa Fe, New Mexico home. She is a master storyteller. This will be our first female banquet speaker, and a vibrant, active woman she is.

Elsewhere in this issue are details about the banquet. But our popular silent auction, the Salty’s on Alki loca­ t ion and De nise McCl u ggage as speaker are a winning combo. Plan to attend.

Here’s a short bio on Denise which she furnished to the club:

“Miss McCluggage is indisputably the best woman driver in the U.S. and one of the six best in the world. “

Like the guy surprised to discover he had been speaking prose all his life, Denise  McCluggage  is surprised  to find she has been a pioneer. She just thought she was doing things she liked to do – among them, drive fast cars and write about those who drove even faster cars. (Or drove cars even faster.) Nonetheless, when women sports­ writers were rare she was on the staff of the New York Herald Tribune cover­ ing primarily skiing and motor racing. She was k nown for d oing what she wrote about, whether it was skiing, racing  or jumping  out  of  airplanes

(always with a parachute.)

After leaving the Herald Tribune, she was at one time or another a member of the following racing or ral­ lying teams in the US or abroad: North American Racing Team, Bill Harrah’s Racing Team, Rover Motor Co., Brit­ ish Motor Corp., Ford of England, Ford A merica, Gene ral M otors, L’Equipe Renault, Team Volvo, Camo­ radi and the Briggs Cunningham rac­ ing team.

She was involved at the inception of Competition Press (now Auto Week) and is now a columnist and senior edi­ tor. She writes about cars regularly for Glamour Magazine, has a syndicated newspaper column called Drive, She Said, and is automotive ed itor of Snow Country. In 1985 she became the first woman to receive the Ken W. Purdy Award for Excellence in Automotive Journalism. She is the author of The Centered Skier (Bantam) and will soon publish an update of her 1985 book for women drivers.