Everyone who has owned a BMW has probably enjoyed sliding through corners full throttle. And many have done some sort of track event like an HPDE with the club. If you are looking for something more challenging, how to take it to the next level. This year, ICSCC is again allowing qualified HPDE drivers to drive on the track during the conference weekend races! Think of this as a mini-HPDE.  These will take place on May 10th and July 19th at Pacific; May 5th, June 14th and August 16th at Portland International Raceway and August 23rd at the Ridge Motorsport Complex in Shelton, WA. Sign up for these events will be through MotorSportReg.com. No details yet have been provided on similar events at Mission and Spokane. 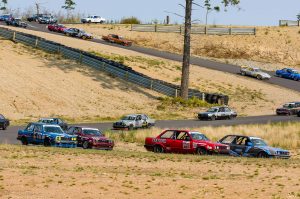 So, what do car enthusiasts, specifically racers, do in the off-season? Most make sure their safety gear is current and working. Some focus on physical fitness, driver skills, studying the GCRs, using simulators, or karting. Some study Ross Bentley’s free track maps of 100 favorite circuits SpeedSecrets.com/Trackmaps  A few race out of the area, such as at Thunderhill. Quite a few attend car races or watch them on TV. Many of us are just saving up to race another season.

and Werner Berger are upgrading theirs. Erik Gerlof and Zach Ogdahl are building new cars. Bob Mearns sold his car to Parker McKean who then sold it to Tim O’Donnell from whom I bought Oscar back in 2009. Still following? For sale are Rick Edwards #103 through Jordan Allen andand Rand Hogan’s #429. And you can always rent from Jordan, Hank Moore, Wes Hill and others. See https://www.facebook.com/groups/pro3racing/

The other thing we do is go to awards Banquets. The IRDC banquet was held at the LeMay Family Museum on February 16th, and over 80 Conference racers and workers showed up! Armadillo Racing’s Andy Collins, presented the trophies because he has been involved in local racing so long that he not only knows the winners, but all the racers whom the trophies were named after! PRO3 had three winners–Rookie of the Year John Voigt, Driver of the Year Brian Bercovitz, and the Chateau Bonzo Award to Jim Cissell. All you need to know about the Bonzo is–it’s very prestigious.

Co-author, Bill Ecker is still working on his PRO3 cars’ and drivers’ book. Here’s a sneak preview. From current (and former) Conference President Rick Bostrom: “For some reason this project is just sooooo appealing to me.  I envision a coffee table book with glossy pictures – a page for each car showing liveries, owners, and race stats.  Like the Shelby register, or historic Trans Am /IMSA chronicles. I think someday people are going to look back on the PRO3 series and be amazed at its size and competitiveness.” Former Chief Steward Bob Mearns: “The #105 car was built by/for Hugh Golden and raced in ITS and SPM as part of the Kahn stable. I converted it to PRO3, and raced it as #161 from 2005-2014. In my first PRO3 race, with ten cars, I finished sixth–and mostly went backwards from then on. Mike Olsen’s #130 car was built in 2005 by yours truly and named The Reaper in

2006. Then there were 12 cars in existence. A key to PRO3’s success was Greg and Toni Miller’s Mothership which provided a communal eating spot at races and really drove home the idea of “Friends between Checkered and Green.”” Stay tuned for more.

Vein, and Chuck Hurley finished fourth, sixth and seventh and BC driver Jason Fraser finished first on a course he had never raced before! Wes also insisted that “you and I would have finished mid pack in that field, I’m sure of it.” So, there is that.

Original PRO3 Line author Michael Olsen will drive the pace car at some of our races this year. You may remember Mike from such memorable lines as “said no one ever” and “there is that.” But he’s probably best

Corrections: We forgot to thank Gerry Frechette for his wonderful photos in the last issue. Please visit his website at gerryfrechette.zenfolio.com. We also overlooked PRO3 winners at the September PIR Enduro. Kevin Doyle, Corey Peters, and Matt Lowell took first in the ME2 class in the two-hour and third in the four-hour–where Josh Moriarty and Collin Koehler took second, and John Voigt, Dave Weller, and Dirk Groeneveld fifth. In the eight-hour E2, PRO3 drivers took first, second, and fourth.

Thanks to Gama Aguilar for stepping up as IRDC President, Course Marshall David Weller for trying to fill Lance Richert’s shoes, Sarah Lally Brown for handling sponsor drawings, and Daniele Hovington for our PRO3 calendars–which you can pick up at any of our great sponsors: Toyo Tires, BMW Northwest, Bimmerworld, 425 Motorsports, Griot’s Garage, Proformance Racing School, and Advanced Auto Fabrication.