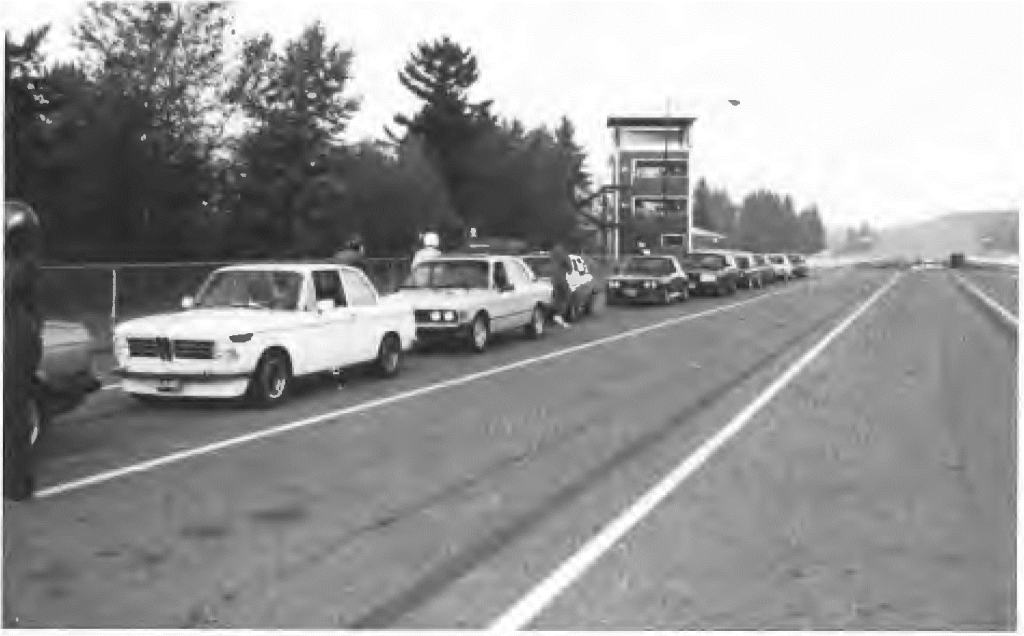 Twenty-one drivers turned out for the ProFormance Driving School on October 29, 20 guys and me, driving everything from a vintage 1600 to the latest M3. Any club member who had ever experienced the fun of one of our clubs’ driving schools at SIR was wel­ come to attend. 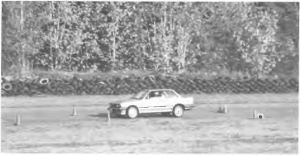 I knew this was going to be fun as I glanced down the list of ProFormance drivers “Speed Secrets” at the Friday night ground school. Ross Bentley and his team of Champion Formula race car drivers designed this driving school especially for us. Although all student drivers attending had prior track expe­ rience, the ProFormance school empha­ sized high-performance skills that improve driving in the real world as well as improving lap times. 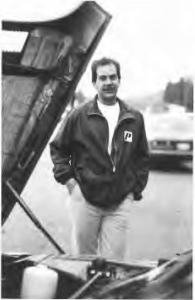 Saturday morning, driving down to SIR in the rain, I envisioned a flooded track, wet instructors, damp clothes, soggy shoes, and slowed driving with poor visibility. My pessimism was dis­ pelled by the sight of a dry track, com­plete with a water truck standing by to hose down the skid pad, at turn 8. As usual, David and Lucetta coordinated the driving school with relaxed preci­ sion. By the time the drivers lined up at the Start/ Finish line, the weather was turning this into a beautiful autumn day.

The school began with 3 driving sta­ tions: the skid-pad exercise and a threshold-braking exercise. The skid­ pad exercise designed to teach a driver to control understeer and oversteer was fun. The braking-on-a-turn sta­ tion, set up at turn 2, was designed to teach threshold braking. ProFormance “Speed Secret”#7 advises “squeeze the brakes on, and EASE off them -keep the car balanced”. The safest, most controlled, and fastest way to stop a car is with threshold braking -braking opportunities to practice squeezing the brake pedal until you reached the limit, easing up slightly on the pedal when you began to lock-up and then reapplying the brakes. For those of us who do not have ABS brakes, it was important to experience the added control gained by squeezing on the brakes. 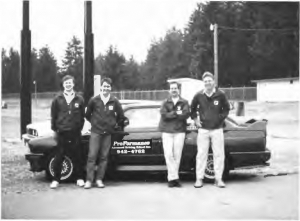 Train-lapping completed the morn­ing. Instructors demonstrated driving the ideal line. Double-clutching was not recommended unless your syncro was  asking  to  be  double-clutched. However, ProFormance “Speed-Secret” #10 was adhered to: “Heel and Toe Downshifting is the ONLY way to downshift”. During the morning track time, what appeared to be a blown engine in turn 3A/ 3B with “oil every­ where” turned out to be a loose plug allowing an oil spill. Easily fixed with some fresh oil and a tight-fitting plug. Large amounts of kitty litter swept over 3A/ 3B kept one of the best turns of the track as fast as always (ProFor­ mance Speed Secret #2: “Go into the corners slow and come out FAST”).

The afternoon was spent on open track. Our ProFormance instructors and 4 of our clubs’ best drivers/ in­structors were available for the rest of the day, advising us on how to improve our performance and lap times. My ProFormance instructor was Don Johnson. Don has experience on 8 tracks throughout North America and was an instructor for the Powell Motorsport Advanced Driving School before he joined the ProFormance group. Don was also a test/ develop­ment driver for a variety of profes­sional race teams. One of the most dramatic changes Don made in my driving line was coming out of the final turn entering the straightaway. Don insisted that I slice to the inside edge of the straightaway immediately (Pro­Formance “Speed Secret” #1; Races are won on the straightaway, not in the corners”).

For those of you who missed the driving school this time, here’s  the complete list of ProFormance “Speed Secrets”: