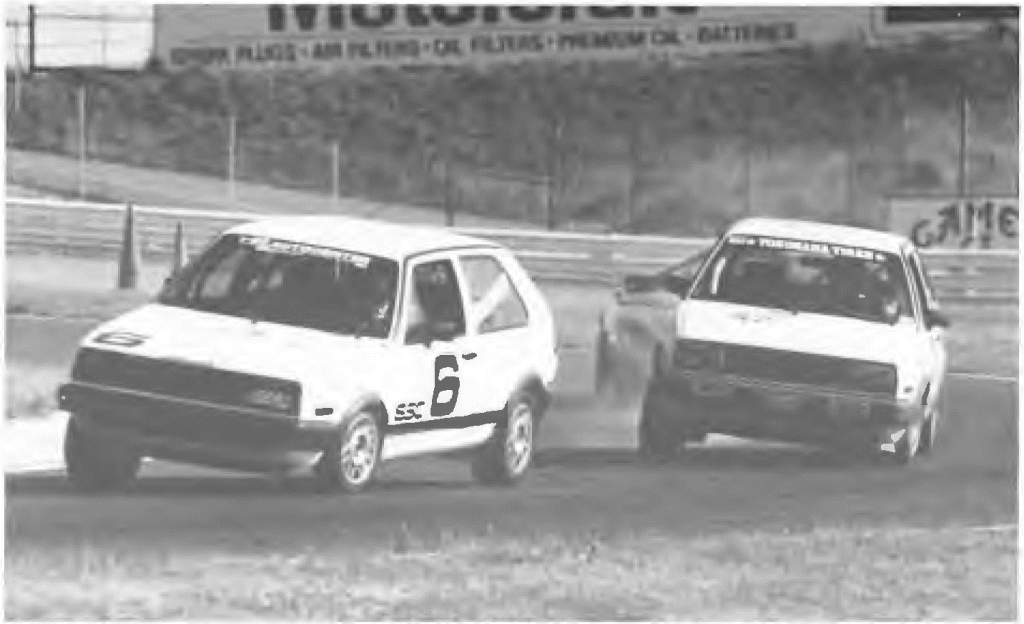 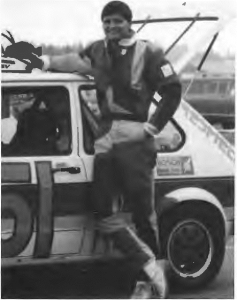 There’s an old racers’ joke: “Know how to make a small fortune racing? Start with alarge fortune.” Most SCCA and Club racers don’t start with even a small fortune, but they11be the first to tell you that it’s worth every penny to get a car on the track and RACE.

While Club and SCCA types don’t get much publicity (we’re trying to remedy that with this series of articles) and they race for only a small trophy, the time and money invested are sub­ stantial. Most are lucky enough to find a sponsor or two for discount parts or help with tires, (so read the names on those cars with appreciation) but for most the “vacation” or “recreation” budget is for racing. 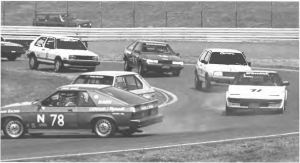 Doug Hahn in the Shelby #78 going for ‘style’points in one of his early races. This is a typical start for the Showroom Stock events. Denny Organ’s GLH is just visible over Doug s car as they come afew inchesfrom making this a Dodge sandwich. Two cars back, note the smile on Bob Paisley as he watches this melee unfold infront of his GTi

For those not familiar with SCCA or Club racing, think of some of the big road races-only smaller. There’s the paddock with frantic mechanics trying to get a recalcitrant car to cooperate, kids playing, lookers looking, and en­ gines warming. Qualifying usually be­ gins at 9 AM with 3 or 4 classes of cars running at the same time. (The same format is used for racing.) After the 20 minute session you (I) try to amuse yourself while waiting for your race in the afternoon, or (2) try to get the car back together for the race in the after­ noon-Number 1 is preferable. Racing usually begins at 1 PM, and lasts till 4:30 or 5:00 with 30 minute races. Of course without the many volunteers who work corners, time, start, co­ ordinate, announce, and deal with the paperwork, all this would not be possible. 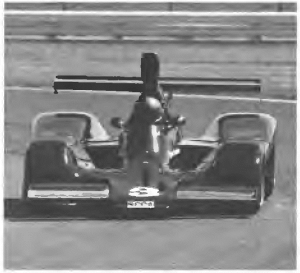 Byron Sanborn was the lucky pilot of this magnificent Can-Am Lola for one race last year. This car causes quite afuss from fans every time it is rolled off the trailer.

Where  does this  take place?  SIR Interested? Come on out, watch, and cheer on your fellow BMW Club members. Don’t forget that most of these drivers, whose season’s results follow, had their first taste of track driving at BMW Club events-auto­ cross or drivers’ school. How about enrolling in one of our schools this summer? Find out what you and your car are capable of. Maybe we11see you on the track, too. Following is a run­ down of BMW Club member’s 1988 racing season results. Most race Show­ room Stock (SS) or Improved Touring (IT). There is one Radial Sedan (RS). NWR is Northwest Region, SCCA; OR is Oregon Region, SCCA; “Na­ tionals” is Northern Pacific Division, SCCA; and IRDC and SCCA  are International Race Drivers Club and Sports Car Club of America.

Denny Organ -Placed first in SSB NWR in his first two seasons racing. Last year was not very productive for D.O. and his Dodge GLH as he entered only one Improved Touring race and finished an unhappy last.

Bob Paisley -SSC, VW GTI. Ran 3 Nationals, 2 Regionals, finished 5th Nationals. Bob says he needs spon­ sorship to get the car on the track in ’89. Anyone out there listening? 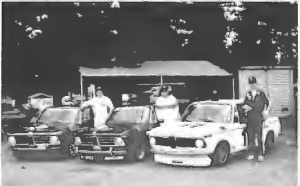 Jerry Highet – ITB 2002, competed in several SCCA and IRDC events. We are not sure of Jerry’s end of season results but hope to see him back this year.

The 1989 racing season will begin on April 1 and 2 at Portland International Raceway with an SCCA Drivers School and Regional races, followed on April 22-23 by a Drivers’ School, Vintage and Regional race at Olympia Airport Track. The first race at SIR will be a Double National on May 27, 28, 29. For details call SCCA at 546-4729, or call me at 643-4729. Comejoin the fun, cheer on the BMW Club racers, and follow the racing news in a new Zundfolge column – coming soon.