The End of Zündfolge … and a New Beginning 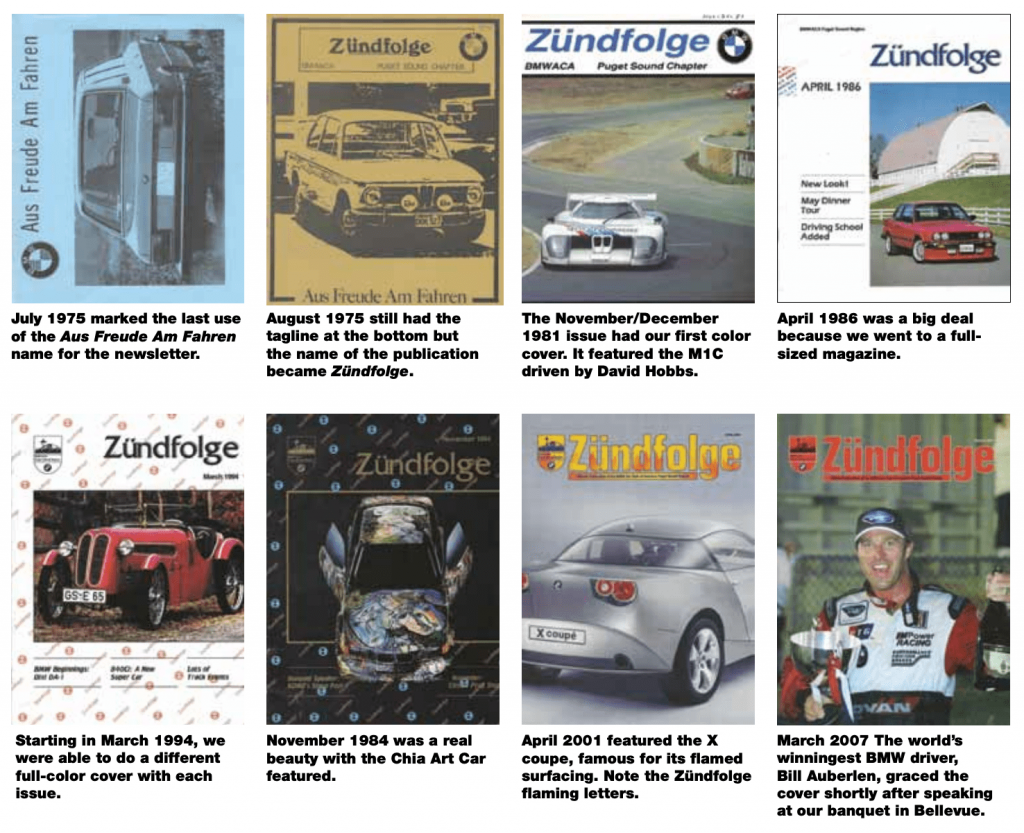 The End of Zündfolge … and a New Beginning

Dispensing with printing Zündfolge and sending it via snail mail was a fait accompli once the national board changed the dues-sharing arrangement between the national office and the chapters. The chapters have been left with so little money that operations have become difficult and the print magazine became a luxury we could no longer afford.

But this just confirmed the path we were already on. It had become abundantly clear that we could communicate with our members quicker, more frequently, and more cost effectively via electronic means. Thus, the path forward for the chapter is website centric with social media and outbound emails being the way we will make members aware of what is happening in the chapter.

Most of you know this has already begun, as we’ve been using Around the Sound bulk emails for a few years now, along with Zündfolge and other means.

A Little History
The chapter has had a printed publication almost since its founding as BEPS (BMW Enthusiasts of Puget Sound) in 1970. The chapter name changed to BMWACA, Puget Sound Chapter in 1972, as we affiliated with the Los Angeles club and the International Council of BMW Clubs.

The publication’s name was Aus Freude Am Fahren, but that was BMW’s slogan, so a new name was needed. In 1975, a contest was held to rename the newsletter. Dan and Marilyn Patzer’s suggestion of Zündfolge (firing order in German) was the winner. August 1975 was the first issue bearing the new name.

Zündfolge started in a small, 7″x 8.5″ format. They were black and white and often enough covers were printed to serve for multiple months. Most articles dealt with technical issues, as BMW’s support for their cars wasn’t the best back then.

By the end of 1981, we had our first color cover, albeit enough were printed for a year at a time, so it looked like the same newsletter was coming to your house every month. April 1986 marked the transition to a full 8.5×11″ format. The color covers were still printed in bulk, but we were able to print the date on the outside in black. The interior remained black and white for a few more years.

In August 1987, we actually reverted to black and white covers, the tradeoff being that the cover was unique each issue. This scheme persisted for years. It wasn’t until March 1994 that we were able to print a different color cover with each issue. With a color cover, it took us a while to understand that we could print full-bleed (to the edges of the cover). We first took advantage of that in November 1994, when we featured the new, at that time, Sandro Chia Art Car and gold metallic ink. That issue may be my favorite Zündfolge cover of all time. At that time, doing color printing meant doing color separations (negatives) in four colors and requiring four passes of the press! Five with the gold ink! It was expensive and limited as a result.

Of course, a printing press does more than one page per impression. In the case of Zündfolge, four pages were printed at a time. That allowed us to add a color centerfold starting in September 1996.

In 2000, after a long debate, the chapter voted to join BMW CCA as the Puget Sound Region Chapter.

It took a long time before we could do the entire interior of the magazine in color. What changed was digital printing replacing the traditional methods of layout and separations for color photos. July 2010 was the first Zündfolge in full color.

Through most of this time, Zündfolge was published 11 or 12 times a year, although there were a few exceptions. As digital media started to supplement Zündfolge, the frequency of the print magazine has decreased. In 2013, we went to six issues per year. In 2017, we went to quarterly issues. The year 2020 marked the last ink-on-paper issues, while this year has been a transition from quarterly issues, electronically only, to our digital future, which starts after this issue.

Contributors
The history of Zündfolge is one of an extraordinary publication by a local car club. It has only been possible to create, thanks to the dedication of a lot of volunteers over decades. This includes writers, photographers, editors, advertisers, layout people, production specialists, and so many more. On behalf of the chapter, let me simply say Thank You for your efforts. This has been something we can all be proud of.

A New Beginning
While Zündfolge is ending its run as a magazine, it has a new beginning as a medium. The chapter’s website will be the center of our universe, with social media and push email being used to inform members of what is new, with links back to the website. Those push emails have been called Around the Sound for several years. As part of our rebranding and reconstituting of our media presence, Around the Sound is being renamed Zündfolge Mail or Z Mail for short. We hope this will honor and continue the heritage of the publication within the Puget Sound Chapter.

Own a Piece of History
For those who would like to keep, collect, or just peruse some of the historical ink-on-paper Zündfolges, let me know. We have a bit of an archive which will be brought to various events and are available to members. You can also arrange to pick them up from my home or a mutually agreed location.