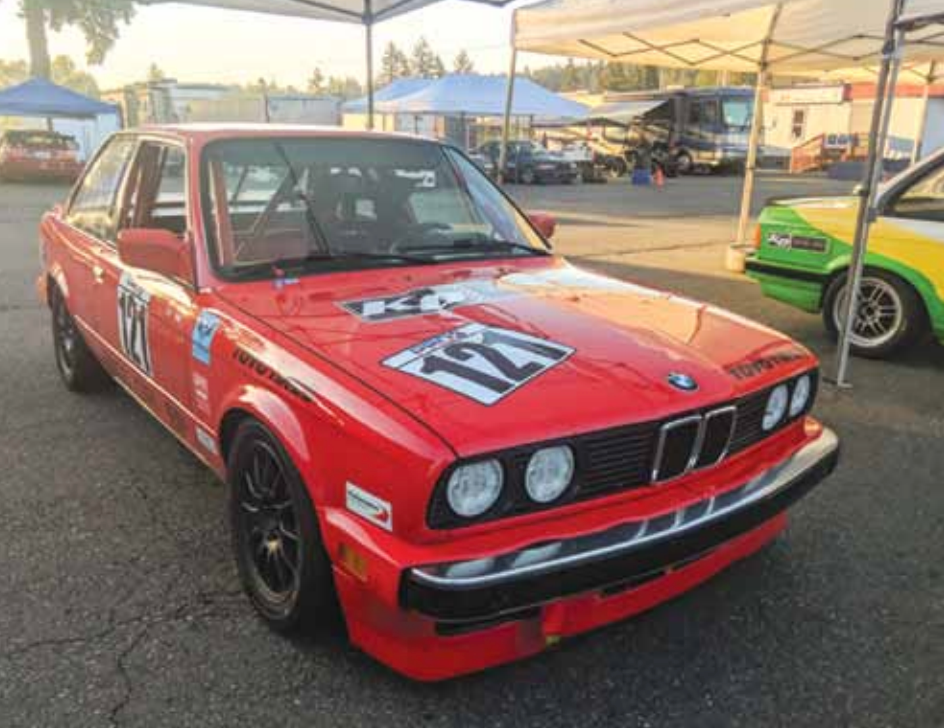 Summer’s over, points are totaled, and that means the icscc pro3 championship is done. Another victor is crowned in the most competitive racing class in the Pacific Northwest. A big highlight of the year was the Pacific Northwest Historics in early July. The relaxed atmosphere of a non-points race caused some atypical on-track fun. Rumor has it the fastest drivers intentionally backed up the field to keep the action two wide up and down the grid. The PRO3 documentary was out filming so look for great footage at (https://pro3film.net/). Getting bunched up was a great learning experience for newer racers who would normally drop out of the pack early in the race. In other sessions the grid was flipped into a “reverse grid” allowing the new and sedate to have the experience of leading the pack to a green flag. I’m sure the fastest guys entertained the crowd passing 10-15 cars in that short 8 lap race.

While the PNW Historics were action packed, the last race was where the real points would be counted and champions crowned. The title wasn’t secure till the last weekend of racing as two top heavyweights in the class still had a shot at the title. It was an exciting weekend that I just have to recap.

It was #244 Corey Peters in his lime green eyesore chasing the hard charging #151 of Matt Lowell, both drivers finished third and fifth respectively in the last Points season in 2019, but both always near the front. Matt was slowly pulling ahead of Corey with the gap only jumping 10 points after Matt was handed a victory when the leader crashed out of race #4 at Pacific Raceways. That was a tough race for his normally metronomic rival Corey who languished back in sixth. (A position us regular joes only aspire to.)

On the final weekend Corey was put in a difficult position with a 13 point gap to close. He did what he needed to do and put the #244 on Pole position for Saturdays “Thunder at the Ridge “race. When the green flagged dropped Matt had a scruffy first lap, it looked like the tide had shifted, and Corey may get the win he needs to keep his championship hope alive. The ridge after all IS a hard track to pass at and Matt had slipped to a ragged fourth with some great drivers between him and victory.

To win a race in PRO3 you need to be a tactician, a student of details, and possess raw speed. But to win a championship? You have to WANT it. BAD. Some say it was a great pass, some say maybe a step too far, a hail-Mary, a lunge of questionable proportions, on the very edge of control. On the second lap Matt launched a double pass into 8A that made one thing clear: That Championship was HIS and Matt was going to take it. (You be the judge. Go to the 2 min 30 second mark (https://youtu.be/2Q4vE_nISq8?t=159). The rest of the race was all but a given. The incredible drive and traction of the #151 out of the last turn was just too impressive for even a high caliber driver like Corey to defend against. By the end of the race Matt had claimed victory and enters into PRO3 history as a PRO3 Champion 2021. Later that evening his wife hosted the annual PRO3 taco party in celebration where he held court over his defeated rivals.

The final race of the season on Sunday also did not disappoint. A 10-row deep split start filled the Ridge with screaming BMW in-line sixes. Battles raged up and down the field. PRO3 newcomer Scott E led the first half of the race, fending off repeated attacks from some of the best drivers in PRO3. I guess we can finally stop calling him a new guy. Eventually chaos gave way to performance and the top three ended as they did in the season’s championship points. Matt Lowell, Corey Peters, and Scott Eckert all in close formation. The whole championship results can be found at icscc.com.

Now that the season is over and the cars are cleaned up and tucked away for winter maintenance, I reflect back on the season’s calamitous moments, thrilling racing, and heartbreaking defeats. What makes PRO3 popular is sharing all those moments with the people who make up the grid. Drivers, mechanics, volunteers, wives, dogs, and kids who come together in the spirit of sport and the love for racing classic BMWs. Without the people it wouldn’t be such a magnetic class for new and experienced racers. One of the biggest shock performances this year has been Scott Eckert getting third in the championship. Just last year he was going through the novice program and this year he was immediately on the pace. When asked about his favorite racing moment he said “It had to be my first PRO3 race in the new-to-me car at Portland International Raceway in May 2021. In order to prepare for the race and better learn the track, I spent a lot of time watching Corey Peters’ race videos. In several of these videos, he’s battling Brian ‘The Champ’ Bercovitz. It was my first weekend in the new car and I had no idea what to expect positionwise. When I found myself battling with Brian during my race, it was a surreal is-this-really-happening moment. I have tons of respect for these drivers and it was a lot of fun learning race-craft first-hand from one of the best. Lots of preparation goes into getting the car out to the track, and just showing up feels like a mini PRO3 Smokey Track Walk. Photo by Nick Carbaugh victory. So having a good result after a hard fight is especially satisfying.”

If you would like to join us, please engage with us during the off season. Follow us at PRO3racing on Instagram. Look for the next season’s calendar at (https://www.icscc.com/). Come out to a HPDE with the BMW Club. Grab your race license from our partners at https:// proformanceracingschool.com/. Plan to walk the pits next year or work a turn station for a ICSCC race to get a front row seat from unique angles.

See the track, meet the crowd, and feel if speed is calling you. If it is…. I hope to see you when the next green flag drops.