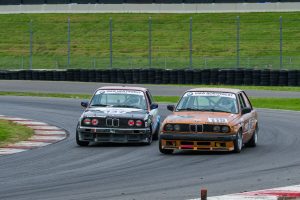 As we sit down to write this in late August, only one weekend of racing remains for the 2018 PRO3 season. As you read this, the season is over, a champion has been crowned, and we have all tucked our cars away for the long cold winter–except for those brave souls committed to the 25 Hours of ThunderHill in December.

From this vantage point, it appears Brian Bercovitz (#91) has positioned himself to be champion, with a 17-point lead going into the final double-race weekend. Barring illness, plague, locusts, impeachment, or other unforeseen catastrophe, he only needs one finish of fifth or higher on either day to seal the deal. Considering that his worst finish this season to date was sixth, and every other race was a first or second, the odds are in his favor.

Hats off to Corey Peters (244) in his newly painted Jeep-green ride. He also ran a very consistent year of first, second and third place finishes and looks to have a lock on second place for the championship–unless The Ridge puts lady luck in his pocket–or he snaps another gear shift lever with his bare hands. Third to sixth places are still open to a wild, wild finish–with broken cars, freak parts failures, and just dumb luck conspiring to keep all those places in play. And The Ridge has historically been a drama-filled weekend as the season closer and only fall race on the schedule–meaning RAIN. The Fine Art of Racing in the Rain can turn a field around in a hurry. Watch for Martin Berryman, the rain god, to score well here.

One disturbing trend this year–the number of aliens in our midst. At Mission, the top 9 finishers were Canadian or dual US/CAN citizens! At the August 18th race at PIR, the top 4 finishers (Brian, Corey, Jeff McAffer, and Martin) were Canadians. And 5th, Gama, is a Mexican! We’ve got a veritable United Nations here!

Aside from the drama on track caused by a super-competitive pack at the front, it has been another banner year for PRO3 as a class. The 2018 grids have consistently had 17+ cars, with 20+ the norm, and an astonishing 28 cars at the IRDC summer classic at Pacific Raceways in July. That was second only to the 43 cars we had at the 2015 NW Historics. There was competitive racing from top to bottom. If you showed up to race, there was definitely someone there to race against.

We welcomed several “newcomers” to the field of regulars–Nor Coquillard, John Parkinson, Andrew Michel, Josh Voigt–and see more up and comers looking to join PRO3 on their way through the novice program. And these kids can drive, let me tell you! Add to that the reappearance of several alumni PRO3ers after dusting off their cars–including Rick Edwards, Tim O’Donnell, and Bart House.

Upholding the spirit of “friends between checker and green” this year PRO3 enjoyed camaraderie in the pits and beyond as well. Whether it was a head gasket repair overnight in Portland, a dinner social hosted by the gracious Rob Johnston (141), replacing Matt Lowell’s rear subframe then the front, or just dinner at a local restaurant as a group–the PRO3 community continued to bond and support one another throughout the season. You’ll usually find Kevin Doyle at the center of the action–though most folks only recognize him by his legs–sticking out from under some poor soul’s bad bruised steed. And, thanks to Gama, Hank Moore, and Ross Bentley (amongst others) PRO3 is now taking that spirit to the next level with a group data-sharing web presence where any driver that is willing to share their own data can see the data of other drivers and learn how to improve. This level of mutual support stands in stark relief to the hyper-secretive attitude of some of the other groups out there.

Interestingly, the one driver who had the worst car luck this year, Matt Lowell, won a free 2019 IRDC entry fee in the drawing at Pacific–because we had over 20 cars there–just one of many promotional ideas from our new President, Gama.

We’re always looking for new ideas. HPDE drivers love competing in our race weekends this year. And at PIR, Bill and Jim joined Dave Weller and PRO3 co-founder Ken Hill for dinner. Ken suggested a promotion with a local radio or TV station wherein we offer a free PRO3 ride-along to one of their lucky listeners/viewers. Stay tuned. Please, share YOUR ideas.

PRO3 also gave a lot back to the ICSCC racing community. Not only did we give of our cars and selves for charity rides, raising money for Seattle Children’s’ Hospital and the Doernbecher Children’s’ Hospital in Portland–several drivers served as workers, most notably Ed Whitman. And IRDC saw PRO3 racers in several critical leadership roles including President (Gama Aguilar-Gamez 209), Equipment Manager (David Weller 6), Rules Chair (James Crivellone 68) and Chief Driving Instructor (Bill Ecker 137). Sixteen years in, PRO3 is as vibrant and robust as any racing group around.

Want to get involved? Just call or email. There are lots of PRO3 cars for sale (though Nor bought Dave Bennitt’s beautiful Watson-liveried car) and plenty of drivers willing to help you build a new one. See you at the track!

P.S. One sad note–unless there’s a groundswell of support, our beautiful PRO3 calendars may be a thing of the past. With Lance Richert less involved, the effort and cost is becoming too much.

P.S. Co-author Jim Cissell has fallen a bit behind in finishing his race videos, but he has just posted our last race in Portland at https://youtu.be/9aDCisn8JOY which features an epic battle between your co-authors.

Special thanks to Doug Berger for the great photographs all season long.