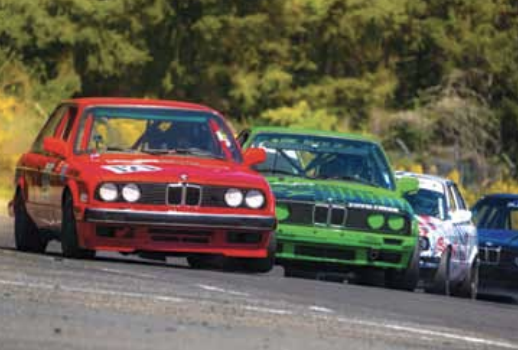 On May 1, fourteen months into Covid, the paddock at PIR was alive again with laughter and spectators were allowed up to 25% capacity. Twenty-one PRO3 cars and drivers showed up for the race. The competition was fiercer than I have seen in my 13 years of racing.

On Sunday, Matt won again with Corey, Chuck and Scott again second, third and fourth with Brian fifth and Daniele sixth. Matt has definitely served notice that he will be the front-runner this year. Yours truly (Jim) finished thirteenth Saturday and fourteenth on Sunday. The action was tight and clean all around. To my knowledge there were no major mechanical failures or collisions. Check out my video featuring five great PRO3 drivers and me: https://youtu.be/_-eFxUrgxiQ

At our second race weekend on May 15-16, Tribute to the Volunteers at Pacific Raceways, twenty-nine PRO3 cars showed up. That’s with the Canadian border closed, which could have meant another 11 racers, rivaling the 43 that we had at the 2015 Pacific NW Historics and NASCAR GASS races. In addition to 29 of 44 entries in Group 1, PRO3 represented almost one half of the entries in Group 5 and the Enduro.

With three NW races the same weekend (ICSCC, SCCA and Lucky Dog) all pulling from the same worker pool—and no Canadians (one-third of our workers) and five days before the race, we didn’t know if we would even have a race. But everyone got on the horn and we ended up with three workers on almost every corner. What an action-packed weekend it was.

There were lots of mishaps on track. On Saturday my brakes failed going into turn 2. Then I had a close encounter with a tow truck. Scott Studerus ended up in the berm at the exit of 6. And Dave Weller parked it in the ditch at turn 3, then came back Sunday and broke a rocker, ending his race weekend.

For those who survived, the racing was spectacular. On Saturday, Brian qualified with a 1:35.1. Coley ran a 1:35.2, followed by Corey, Matt, Jeff and former champ Shaun Northrop. In the race, it was Coley, Brian, Corey, Matt, Shaun, Daniele, Scott, Chuck and Jeff. Sunday, Matt qualified with an amazing 1:34.8. Sunday’s race was all-out war. When the dust cleared, it was Matt, Jeff, Chuck, Shaun, Scott, Corey, Brian and Daniele, with the per lap gap between first and eighth being just 6/10ths of a second. Coley was the fastest by 4/10ths but ended up in the berm after five laps.

So, after two race weekends, it is Matt Lowell in a commanding lead with 50 points, followed by Corey and Jeff with 41, then Chuck 40, Scott 36, Brian 33 and Daniele 30. With the return of former champs Chuck Hurley and Shawn Northrop, and Matt driving like a man on fire, Brian’s attempt at a three-peat is not going to be easy.

There are so many new PRO3 drivers. In addition to Scott Eckert, there’s Fil Aleva, Greg Hartman, Scott Studerus, Matthew King, Lou Kings, Guy Berry, Sean Hester, Robert Coneybeer and Scott Thompson. Welcome aboard. If YOU are thinking about getting started in PRO3, now’s the perfect time with so many great cars changing hands. Stay in touch on Facebook—PRO3 Racing.

Come see all the action at our next races—June 19-20 at Portland International Raceway (PIR) and The Historics July 2-4 at Pacific Raceways. Don’t forget to check out our PRO3 movie, Director’s Cut, vimeo.com/549062642; website, pro3film.net; and GoFundMe site, gofund.me/aab784a2.

This is my final PRO3 Line for Zündfolge. Bill Ecker and I took over the writing duties from Michael Olsen back in 2016. Now, we pass on the reins to two of our younger and faster PRO3 racers. Thanks for the great run. Please stop by the paddocks and share car stories. Now, here’s Nick Carbaugh and Eddie Taras.

Nick Carbaugh
PRO3 is a wonderful group to start your racing journey. Eddie and I both intended to just do track days but were pulled in by the siren of wheel-to-wheel competition. We seem to turn our fastest laps when right behind one another shrouded in the familiar Red Mist. Going forward we will try to bring you updates to the championship, introduce you to new drivers, and push you to test your own metal and build skills in the crucible of PRO3 racing. Look for me in the paddock trying a last-minute fix on a budget race car, hauling it as high up the grid as I can.

Eddie Taras
I’m looking forward to the opportunity to share my journey into racing with you. For me, it all started with a car control clinic hosted by the BMW CCA Puget Sound back in 2014. And now, despite never being mechanically inclined, I own my own racecar and drive in PRO3… talk about a slippery slope! While I may not be the fastest one out on track, my current special ability is sticking to the rear of a car and using telekinesis to force the driver in front into a mistake. Weaknesses…we don’t have time to discuss all of those. Chat more next time.

PRO3’s motto “friends between checkered and green” is always on display during race weekends. We encourage non-racers to come meet the drivers, see some great racing, celebrate in their wins and commiserate in the tougher moments. It’s an awesome community brought together by our love for motorsports and old BMWs. Next race is June 19-20 in Portland, See you there! Come share your ideas for your own race car.