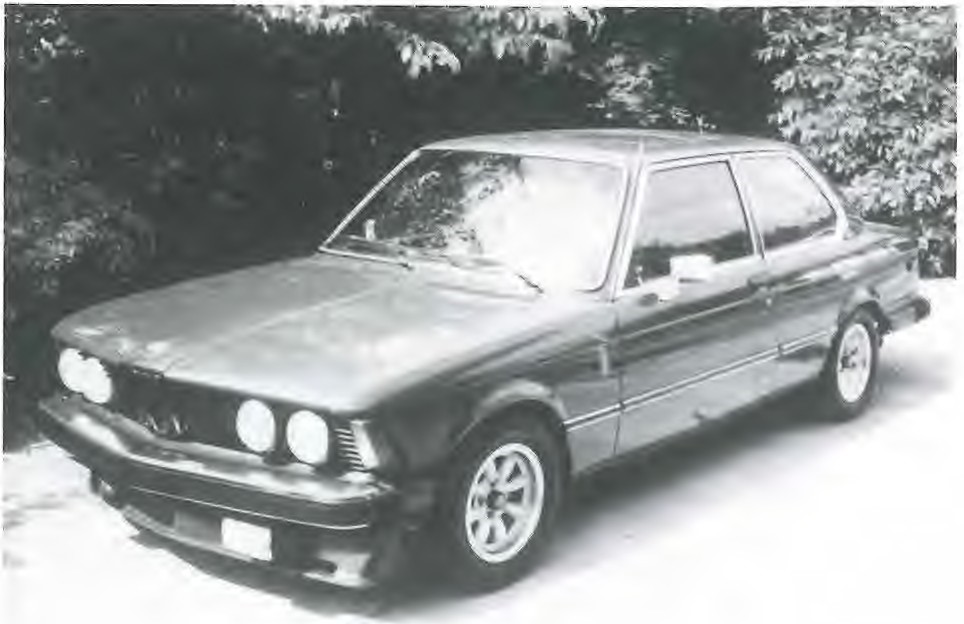 I am writing to share with you and members of the “Club”some of the fun that I have had with my 1979 BMW 320i!

This story starts after I had already owned my car for 4 years (purchased in April 1983, with 58,000 miles on it) and had thoroughly enjoyed driving it for 60,000 miles. Along the way, as an enthusiast, the prerequisite “tweeks” were administered ; shortened springs, Bilstein shocks, Tokico sway bars, and Panasport wheels shod with various tires over time. Fortu nately, the car was an “S” version for 1979. All that really means is that the car came with Recaro seats, limited slip and three spoke steering wheel for comfort and grip. The powerplant was the venera­ ble 2 liter, mated to the 4 speed trans­ mission. Hopefully, I have painted a picture of what my car is (and was!)

Sometime after about 115,000 miles, I started to assess my interest in the car and determined that with the excep­ tion of the available horsepower , I was still very pleased with my ride, (the styling, suspension, seating, etc.). Since it had depreciated in value on the open market , it only made sense to upgrade the powerplant. Enter Dennis Hayes, from hayes Rotary Engineering in Redmond. After many conversations, we decided to go ahead and applicate a Mazda 13B rotary into the engine bay of my car! Dennis assembled the motor to withstand turbo-charging (as if  I want to!) for maxim u m internal strength. The engine is normally aspi­ rated with Dellorto side drafts. With headers, the net result is about 225 HP from  1.3 liters.  The  real  trade  off between this engine and the BMW engine is fuel consumption – I 2 mpg (13B) vs. 19 (BMW). However , the rotary willingly sings up the tach to 9500 rpm!

After  Dennis  built  the  motor,  he referred me to Steve Hersch, owner of Heavy Weather Fittings. Steve is a rare breed   of  engineer / fabricator / artist, who, took on the task of installing this potent powerplant. Steve had the car for a total of about 10 weeks during the removal and installation. (See Steve’s article for all the technical details of the transplant!).  My credo to  Steve and Dennis was to build it “Hell for Stout!” and they did not disappoint! To make the engine and the installa­ tion “bullet – proof” was my project goal, as this car is a daily driver for me. Why would someone want to do all this, when you could either build a new BMW motor , or perhaps get involved in some other car (newer and/ or fas­ ter)? Well , in summation, this is how it stacks up . . .

In finishing this story, to date, I have put just over 10,000 miles on the “new” car and still it’s a ball to drive! Bugs and  glitches  have  been  few  and  far between.  This  has  not  been  a cheap endeavor to pursue. If you ever get the itch to do this,  set  aside  a high  four figure  budget  to  scratch  it  with, and hire  the  best  people  to work  toward your  interests.

[Steve Hersch has provided us with the preceding insights from the “con­vertor’s perspective.”]

This will not be the first time Ger­ man and Japanese technology have joined, however, it is probably the first time a Mazda 13 B rotary engine has been under the hood of a 320i.

Some of the specifics: Specially made parts were kept at a minimum, and wherever possible either BMW or Mazda original equipment was used. All new fasteners remained metric. 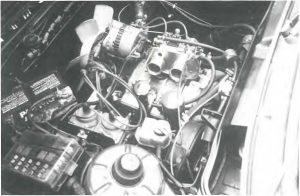 Believe us when we say: this engine produces an exhaust note you’ve never heard beforefrom a 320i!

New engine mounts were designed to use the stock Mazda biscuits. The forward section of the driveline was modified with an RX 7 yoke in front and the Bavarian splines to the rear, so that the center support bearing the aft section   of   driveline   are   original equipment. The new exhaust system follows the approximate trail of the stock 320’s. A Mazda Rotary Pickup radiator and oil cooler were installed with  a subsequent removal  of some BMW sheet metal to accommodate the Mazda core. The 320i high pressure fuel pump had to be removed since the rotary was supporting a Dellorto side draft carburetor. Two Fawcet pumps were installed utilizing the stock filter and fuel lines. The 320’s steel hyd raulic clutch line was flared for the Mazda fitting, so that the BMW master oper­ ates the RX 7 slave. A Mazda throttle cable was married to the stock 320 fit­ ting through the firewall. Wiring was both  easy  and  difficult.  The  BMW tachometer and Mazda alternator both required no modification. But the new fuel pumps needed some bypass work under the fuse box to get them to work when the coils were energized. The injector sensors, air conditioning wir­ ing, electric fan, and radiator sensors were all eliminated  from the BMW loom. A bushing was made to adapt the Bavarian temperature sender to the rotary. The console lost its ashtray to the   Mazda   shifter,  but   now   sports VDO ammeter, oil pressure and temp­ er;;tture gauges. A circuit breaker was installed to protect the ammeter lead.

But  one may  ask  why do all this? Why  spend  the  money?  Why  create other problems to solve when original equi pmen t   mainte nance   is   pes k y enough? From the owner’s perspective it is scoot, speed – the rabbit stays the same  size  but  genetically  engineered for more kick. Passing gear is seductive.

From my view as the converter – it is lust, it is jazz, it is there to d o – it had not been done before. It is uniquely American to steal the best ideas and technology on the planet and then combine them in a thoughtful mixture to produce something with a twist, a turn of wit.

It is my opinion that when things begin to be viewed as pure and sacred, they then become static, rigid, unchanging, uninteresting, lifeless . Boundaries need to be nudged, para­ meters should be pushed. The com­ posers Duke Ellington and J.S. Bach knew this. They always left room in their scores for the spontaneous thought of the musicians playing the piece. J.S. has been dead for so long now that his music has been filled with the notes of the purists, and new interpretations of his work are often met with cries of adulterer, vilifier. But Duke’s compo­ sitions have always welcomed new approaches.

So it was done because it was music waiting to be composed, it was d one for the lust of joining technologies. The irony, though, is that the rotary or Wankel engine is the product of a German mind and had to travel to Japan before being mass produced.