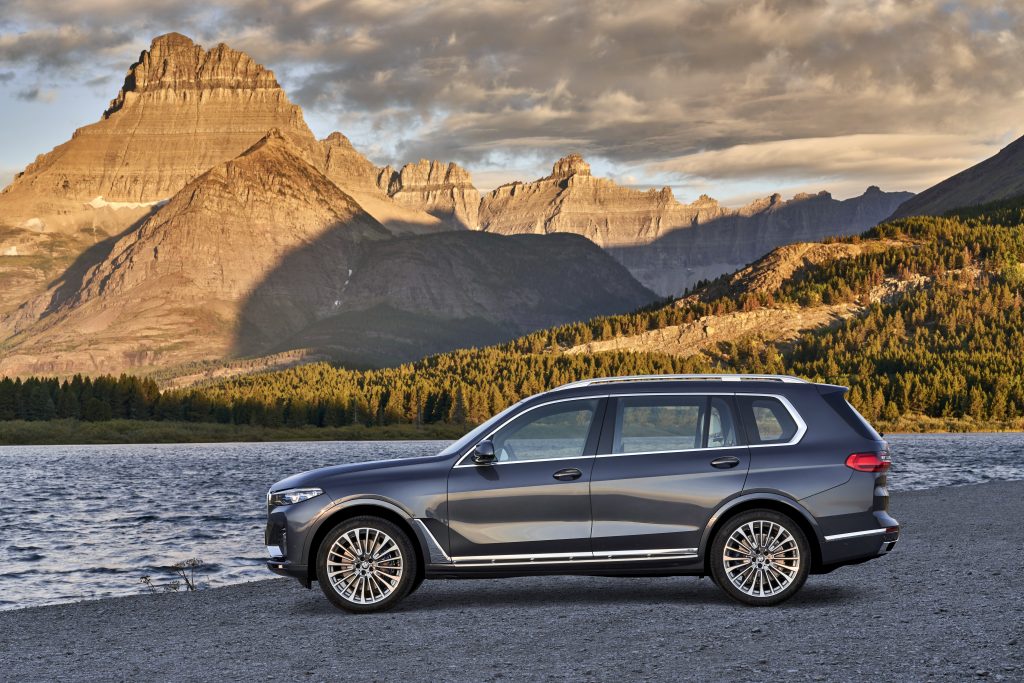 For the first time, BMW customers will have the opportunity to pre-order the first-ever BMW X7 online through www.BMWUSA.com. Customers will be able to select a participating dealer of choice and complete their pre-order deposit transaction online via their mobile device or from the comfort of their home. Their selected dealer will then reach out to them to finalize the options and colors of their BMW X7. Customers who pre-order online will also enjoy priority vehicle production.

The new 2019 X7 becomes the fifth BMW model to be currently produced in Plant Spartanburg, South Carolina. The new X7 will be added to the 1,400 vehicles, including the X3, X4, X5 and X6, which are already produced every day at BMW Group’s largest global production plant. In 2017, the 10,000 employees of Plant Spartanburg produced 371,284 vehicles, 70 percent of which (272,346), were exported to 140 countries around the world, making BMW the largest exporter of vehicles from the U.S by value.

To date, the BMW Group has invested eight billion US dollars in Plant Spartanburg and is supported by 40 suppliers in the SC area and 300 suppliers across the U.S. The current manufacturing capacity stands at 450,000 vehicles and a further 1,000 new jobs are expected to be added by 2021. Since the plant opened on September 8, 1994, 3.9 million vehicles have been built at the South Carolina location.

BMW has pulled back the covers on a new definition of automotive luxury. The BMW X7 blends presence, exclusivity and spaciousness with the versatile and agile driving properties customers would expect from a BMW Sports Activity Vehicle (SAV). The newest and largest model in the BMW X line-up uses outstanding powertrain options and chassis technology, plus generous levels of space in each of its three rows of seats, a luxurious ambience and advanced equipment features, to deliver unparalleled experiences for the driver and passengers.

BMW’s new design language brings the modern elegance characteristic of the brand’s luxury-segment models to the exterior of the BMW X7, and adds visual poise, assurance and an overriding sense of authority. The BMW X7 represents the next stage in the premium carmaker’s ongoing model offensive in the luxury segment. 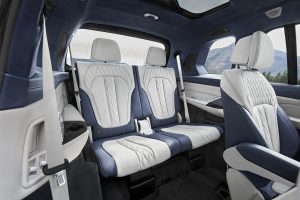 The expansive exterior dimensions of the BMW X7 take luxury to a new level. At 203.3 inches in length, 78.7 inches wide and 71.1 inches tall, and with a wheelbase of 122.2 inches, the X7 displays harmonious proportions and establishes itself as the new head of the BMW X model family. A new use of forms, dominated by clearly structured surfaces and precise lines, lends the BMW X7 its modern aura. The largest kidney grill ever designed for a BMW model features very prominently at the front of the new BMW X7. Together with the slim twin headlights extending up to the grill, it emphasizes the width of the car and creates presence. When viewed from the side, the large windows and long, flowing roofline of the new BMW X7 hint at a spacious interior bathed in light. The rear doors are longer than the front doors, emphasizing the spaciousness of the SAV’s rear compartment and easing entry and exit for second and third row seat occupants. Clearly structured surfaces and the eye-catching character line rising up to the rear are hallmarks of the brand’s new design language. The versatile functionality of the new BMW X7 is highlighted by its 8.7 inches of ground clearance.

The sizeable dimensions of the new BMW X7 are also expressed at the rear, which is broken up by horizontal lines and bordered by vertical separating edges. The slim LED rear lights provide a clear segmentation of the rear. Bridging the space between the two units is a chrome bar – a design cue only previously encountered at the rear of the BMW 7 Series luxury sedan.

(I’ve seen the X7 in person. It is a beautiful vehicle with very nice proportions. The only thing about the exterior styling likely to give people pause are those front kidneys, which are huge. They don’t look as bad in person but they are still going to take some getting used to. —Editor)

The impressive open expanse of the BMW X7 interior brings a new sensation of space to the luxury segment. The three rows of seats treat the driver and passengers to an exceptional feeling of roominess within the X7’s elegantly appointed interior surroundings. Expansive surfaces and clean structures give the instrument panel a modern look and its lines flow smoothly into the door panels. Large trim surfaces framed with electroplated accents on the instrument panel and center console enhance the interior’s elegant and exclusive aura.

Grouped together clearly in the center console are the iDrive Controller, newly designed gear selector, the start/stop button, the Driving Experience Control switches, electronic parking brake switch and controls governing the settings for the air suspension and optional off-road modes. The control panel for the standard 4-zone climate control system also has a new modern design.

A standard three-panel electronically controlled panoramic glass sunroof floods the interior with light. Combined with the large windows, the new BMW X7 offers a very open an airy environment to all vehicle occupants, irrespective of which seat they are in. Electrically controlled sliding headliner shades are standard for the front, center and rear sunroof with the third-row passengers having their own controls for the rear sliding shade.

The roominess and versatility of the interior is underlined by the standard fitment of three rows of seats (offering space for seven people). The two passengers in the third row can settle into full-size seats that are fully capable of accommodating adult passengers over longer journeys. Comfort levels here are enhanced by an additional rear glass sunroof panel, cup holders and armrests integrated into the side panel trim. The standard second row configuration offers seating for three. Alternatively, two extremely comfortable individual Captain’s Chairs can be specified for the middle row as an option. These comfort seats offer the same range of adjustments as the seats for the driver and front passenger. The individual seats for the second row also feature integrated armrests and comfort cushions. Two second-row seats with a space between them represent a first for a BMW SAV and create an exceptionally luxurious ambience in the rear compartment. The space between the individual seats also provides an access route to the third row.

In either standard or optional configuration, the second-row seats in the X7 slide fore and aft through 5.7 inches of travel. Adjustment of the fore/aft position – like all other seat positions and backrest angles – is electric for the first, second and third row of seats. The backrests of the seats in the second and third rows can be folded down and raised electrically via switches located on the driver’s side as you enter through the rear doors and in the cargo area. The seats in the second row can also be tilted forward fully to make getting in and out as easy as possible for third-row passengers. The second-row seats can be returned to their upright position at the touch of a button, at which point child seats can be fixed in place securely and easily using the ISOFIX attachments. 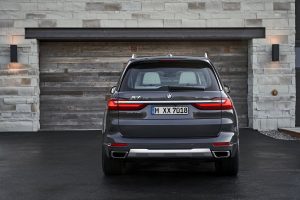 The new 2019 BMW X7 launches with a choice of two updated gasoline engines. Heading up the range is the BMW X7 xDrive50i, with an extensively updated 4.4-liter V8 engine. A 3.0-liter inline six-cylinder engine, found under the hood of the new BMW X7 xDrive40i rounds out the model line-up. All engines channel their power through an eight-speed Steptronic transmission, while BMW xDrive intelligent all-wheel drive is on hand to ensure that power is transferred into secure progress – on or off road.

The power unit fitted in the new BMW X7 xDrive40i boasts the free-revving ability inherent in all inline six-cylinder engines from BMW, plus a wonderfully eager response. The 3.0-liter engine employs a single twin-scroll turbocharger and direct injection technology whose maximum pressure of 5,076 psi ensures the fuel is delivered in extremely precise doses. The straight-six generates its maximum output of 335 hp between 5,500 and 6,500 rpm, while the peak torque 330 lb-ft is available from 1,500 – 5,200 rpm. The new BMW X7 xDrive40i accelerates from 0 to 60 mph in 5.8 seconds. Eight-speed Steptronic transmission: more seamless and integrated Both engine variants of the new BMW X7 are linked to an improved version of the eight-speed Steptronic transmission, whose wider ratio spread and new control electronics help to increase the powertrain’s overall efficiency. New torsion dampers reduce rotational forces and converter slip for improved shift comfort. xDrive all-wheel drive with optional rear locking differential.

The task of maximizing traction, agility and directional stability in the new BMW X7 falls to the latest generation of the BMW xDrive intelligent all-wheel-drive system, which is now able to split drive-torque between the front and rear wheels with even greater precision and speed as the situation demands. For added efficiency, full power can be directed completely to the rear wheels in situations where all-wheel drive traction is not required.

The design of the new chassis, based on a double-wishbone front suspension and a five-link rear suspension provides the best balance of exceptional traction on rough terrain and excellent dynamic response and ride comfort on pavement. The BMW X7 SAV comes standard with the

Dynamic Damper Control system with two-axle air suspension. The electronically controlled dampers sharpen the SAV’s handling while at the same time increasing ride comfort. The driver can select from two performance settings for a more comfort-oriented or sportier driving style.

Speed-dependent Integral Active Steering turns the rear wheels either the same direction as the front, to enhance stability in high-speed maneuvers such as lane changes, or in the opposite direction to the front wheels, to facilitate low-speed maneuvering by decreasing the turning radius.

The X7 xDrive40i comes standard with Black SensaTec or a choice of nine premium Vernasca and Extended Merino Leathers. The X7 xDrive50i features standard Vernasca leather interior in Black, Canberra Beige, Coffee or Cognac with the option to upgrade to an Extended Merino Leather interior in Black, Ivory White, Coffee or Tartufo. A two-tone Ivory White/Navy Blue Full Leather Merino interior, with a Navy-Blue leather dashboard and a Navy Blue Alcantara headliner, can be specified for both models.

(The two-tone White/Navy leather interior on the launch vehicle was stunning. —Editor)

The Panorama Sky Lounge LED Roof, generates a very special and exclusive aura when darkness falls, with LED light spreading evenly across the glass surfaces to illuminate more than 15,000 graphic patterns and generate a display reminiscent of a starlit sky. The color scheme of this atmospheric light show can be adapted as desired.

Offering a significantly expanded array of driver assistance systems, the new BMW X7 is able to support the driver through an array of interconnected sensors by processing camera images and data acquired by radar.

(The list of electronic features and their explanation would require more space that Zündfolge has. Suffice it to say, the X7 is a state-of-the-art vehicle with all the modern driving aids. While helpful when working, it is almost inconceivable to me that people will be able to own this vehicle after the (extended) warranty has expired. –Editor)