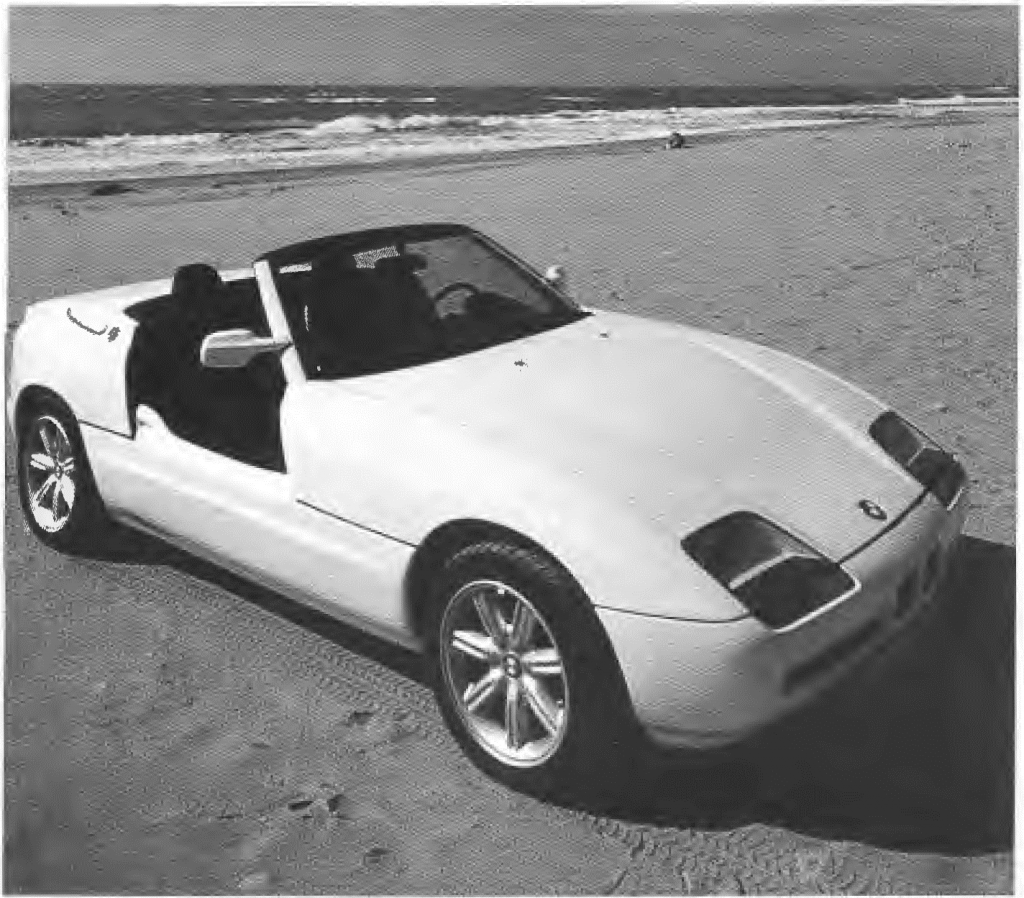 The controversial Z1 roadster recently made its appearance for the first time on German roads. While the car’s take-it-or-leave-it styling, disappearing doors, and use of synthetic materials has commanded most of the attention, it is the car’s road handling that is gathering the most praise from re­ viewers who have driven it.

The car is a product of the com­pany’s Technik Division – a sort of R&D outfit. Before settling on the rad­ ical reworking of the roadster concept that became Zl, they took a look at both an off-road vehicle as well as a luxury coupe. The car only took three years to develop -extremely short by not only :QMW’s standards, but those of the industry as a whole. The extent of the development work becomes ap­ parent not only in the styling and bodywork, but underneath the skin as well. This vehicle is much more than a plastic-bodied 325i.

The floorpan, for example, weighs only 33 lbs. Specially developed by Messerschmidt-Bolkow-Blohm, it is a sandwich of glass matting, epoxy resin, and polyurethane foam, with specially placed reinforcing members. BMW claims this new pan adds 10% to the torsional rigidity while at the same time providing clean underbody aero­ dynamics. The G.E. thermoplastic Xenoy is used for front, rear, and side panels, while an injection molded epoxy is used for trunk, hood, and convertible top. Each material is paint­ ed differently depending on flexibility of the panel being painted .

While all this is well and good and certainly represents a significant ad­ vance in the use of plastics in auto­ mobiles, it is the car’s performance that has won the plaudits of critics.

The most obvious improvement in the  eyes  of  some  is  the  car’s  scintillating roadholding -up to 1g! This is due to the low center of gravity, improved weight distribution (49/ 51 f/ r) 225/ 45VR16 Pirelli P700s, and a revised rear suspension. This new sus­ pension is a multilink arrangement which BMW calls a “centrally guided spherical double wishbone axle.” The term “centrally guided” means that the upper subframe, transverse links, and tie rods are attached to the differential casing which is in turn connected to an aluminum tube containing the drive­ shaft. This tubeis bolted to the differen­ tial and gearbox.

Quite an arrangement,and apparent­ ly one that works superbly. According to Georg Kacher of Britain’s Car, 10 or 15 minutes at the limit produced  an idea that the Bavarian engineers have raised the challenge of mastering a car to a levelIcan no longer reach … We had all suspected that, one day, such a production car would be produced ,it’s just thatIdid not think it would be a BMW.”

So what does this mean for us, you ask? Well, importation is unlikely for the forseeable future – DOT would surely frown on the disappearing doors, the car is expensive ($45k), and anyway production is sold out through 1990. But what we can hope for realistically is that some of this tech­ nology will filter down to BMW’s models sold over here. That would cer­ tainly be something to look forward to.

There are no ads matching your search criteria.